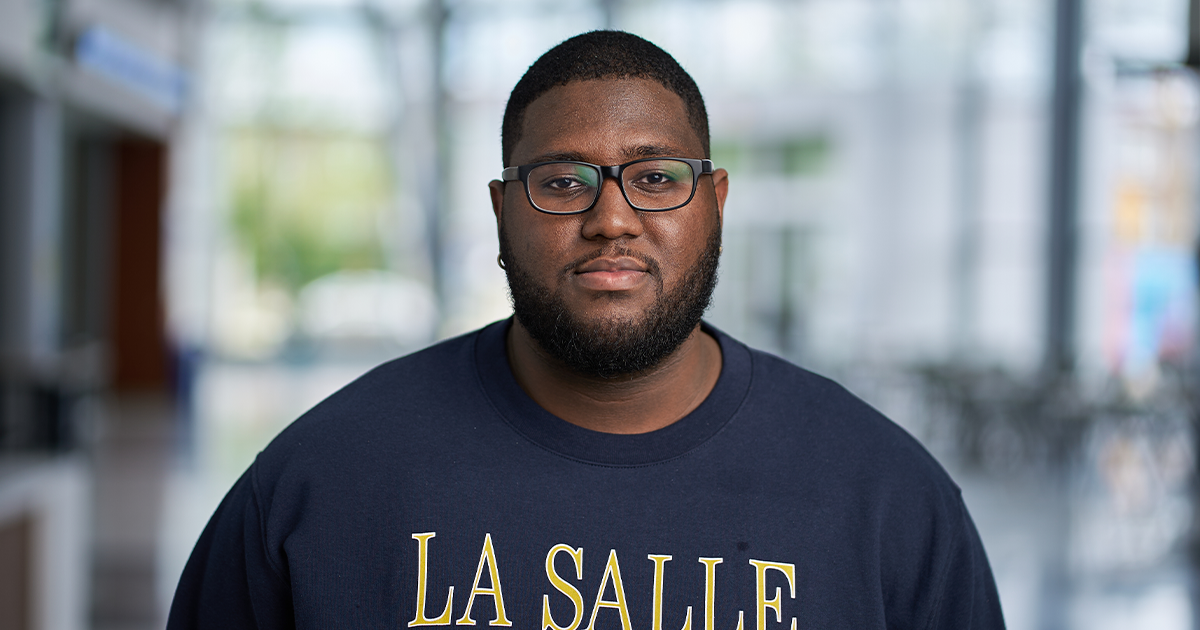 Raheem Moncrieffe, ’22, became an expert at time management to handle a job at the Philadelphia airport and coursework at La Salle’s School of Business.

Raheem Moncrieffe, ’22, is all business when it comes to his academic success.

A native of Kingston, Jamaica, Moncrieffe and his family moved to Philadelphia in 2014. With encouragement from his older sister, Melonie, to pursue a business degree, Moncrieffe enrolled at La Salle University’s School of Business, in part, due to its reputation.

“I chose La Salle because of the smaller class sizes, and I didn’t want to go to a university where I’d feel like I’m just a number,” he said. “La Salle’s 4-year BS/MBA program in accounting was also a major pull factor in choosing La Salle.”

Moncrieffe, a working student, embraces balance and time management. A finance and accounting major, he is a member of La Salle’s Class of 2022.

The business student is a full-time fleet service agent at Philadelphia International Airport, with duties like loading luggage and marching in aircraft—using hand-held lights to guide taxiing aircraft to the terminal.

Moncrieffe’s job at PHL helps support his family. Melonie took on much of the household responsibilities after their eldest sister died of cancer. Not long after, Moncrieffe’s mother suffered a heart attack and could not continue working.

“Due to these circumstances, my sister had to contribute more to help the family keep afloat,” Moncrieffe explained. “I tried helping where I could, working full-time at the airport while going to school, but now that I’m graduating, I think I’ll be able to take a lot more off her shoulders.”

Working late hours, sometimes until 4 a.m., Moncrieffe must create a schedule and keep to it. Otherwise, it’s challenging to wake up for early classes and absorb the material.

“I was able to overcome a situation like this with the help of the great friends I’ve made here at La Salle, the professors, and my sister,” he said. They were the ones that kept me going. My sister would personally help me produce a schedule every semester to ensure I’m completing all assignments. My friends and the professors were always open to explaining something I might have missed in class. Their continuing support along with my own desire to be successful helped me get through one of the most difficult periods, but also one of the best, in my life.”

Moncrieffe became invested in his finance and accounting course material after his first class with assistant professor of accounting Tom Adams, Ph.D., CPA, ’05.

“Raheem is one of the most talented students I have ever had in class. He is kind, intelligent, hardworking, and quick on his feet. His positive attitude and enthusiasm are contagious, and I smile thinking back to him performing magic tricks for me after class.”

“Dr. Adams made me develop a passion for accounting that I didn’t have when I first chose it as a major,” Moncrieffe explained. “The way he teaches resonated with the way I learn, and the more classes I had with him, the more engrossed I was in accounting.”

Adams’ guidance outside of the classroom also helped Moncrieffe succeed.

“Raheem is one of the most talented students I have ever had in class,” Adams said. “He is kind, intelligent, hardworking, and quick on his feet. His positive attitude and enthusiasm are contagious, and I smile thinking back to him performing magic tricks for me after class.”

Yes, Adams said, Moncrieffe is a magician. It was but one component of his personality, said the professor, that made him an important presence in his classroom.

“Raheem is a personable and thoughtful individual,” Adams said, “and a shining example of the students that attend La Salle: gritty, determined, and persistent along with a never say die attitude.”

Outside of classes and work, Moncrieffe is president of La Salle’s chapter of the National Association of Black Accountants and a part of the University’s Business Scholars Co-Op program. Mentorship from Penelope Grob, director of the Business Scholars Co-op Program at La Salle, motivated him to succeed.

“She would have workshops to build my interview skills and she also helped build my resume,” he said. “Most importantly, she played a major role in me securing a job after graduation.”

“Raheem is one of those students who you know is destined for great things,” Grob said. “I remember Raheem coming to La Salle for an 8 a.m. class after he worked a late shift at the airport and was able to contribute to the class, be an active and engaging participant and juggled his work and academic life. Not many students are able to work almost full-time hours, commit to volunteering on campus, be a double major, and show a smile each and every day. I look forward to seeing where life takes Raheem. I know he will continue to be a wonderful human who will do great things and be an example to everyone around him.”

Following graduation, Moncrieffe will work as an audit associate at KPMG US LLP while studying for the CPA exam. Entering the working world with a La Salle degree means a lot to Moncrieffe, who can now help his sister provide for their family.

“I will have the opportunity to relieve her of some of that burden she had to shoulder by herself for so long,” he said.

A business degree was a balancing act for this Explorer