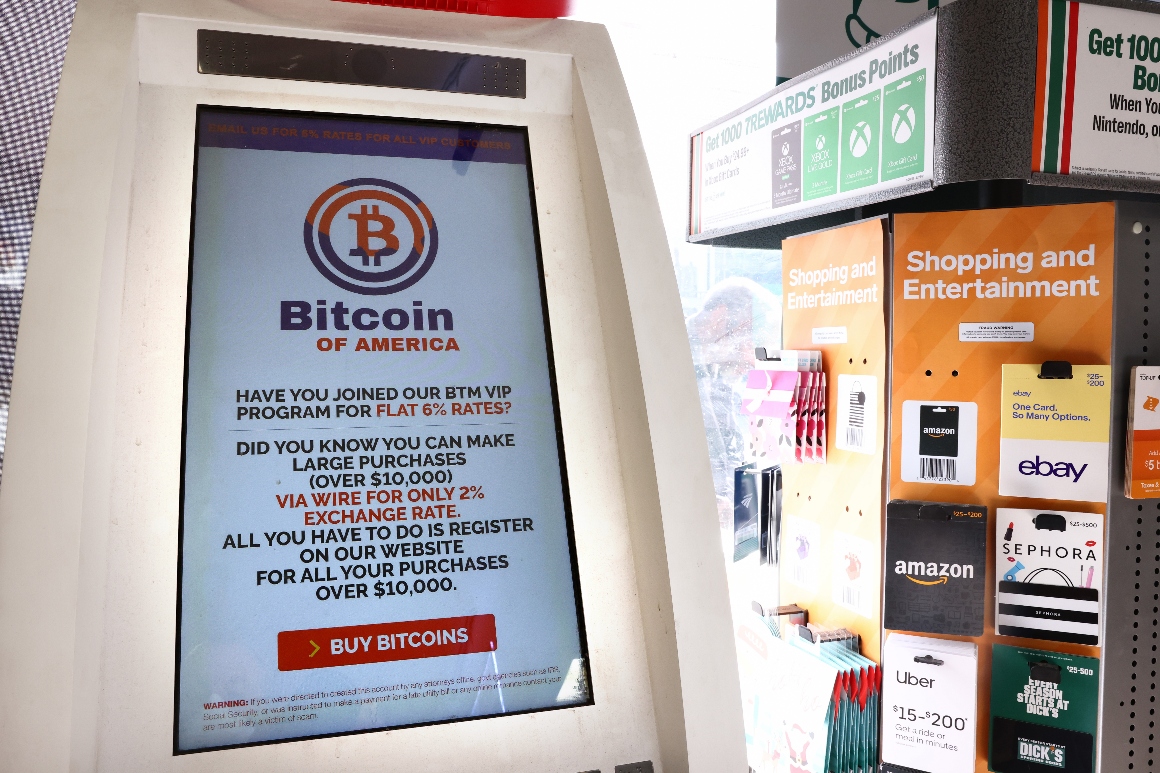 The Wyoming effort also offers a window into some of the forces vying to shape the future of digital money: namely, big retailers and veterans of the commercial banking industry.

“We are looking for alternative currencies to compete with the U.S. dollar,” said Zhou Xiaomeng of American CryptoFed, a group backing the Wyoming proposal. American CryptoFed, whose founders previously worked on mobile banking platforms, plans to issue a so-called algorithmic stablecoin — a cryptocurrency whose value is pegged to the consumer price index — that can be collected for sales tax purposes.

For retailers, part of the appeal would be convenience, said Wyoming Rep. Ocean Andrew, the sponsor of the amendment, which would allow crypto tax payments to be made automatically via digital smart contracts. Andrew, a Republican who runs a restaurant business based in Laramie, said he wanted to reduce the paperwork burden of sales taxes. “It’s just an idea about how to make the process more seamless and automated,” he said.

But some of the plan’s backers have grander designs. As American CryptoFed’s name suggests, the group aspires to compete with the Federal Reserve System, which regulates the dollar.

If the Wyoming proposal succeeds, its real significance would be to help legitimize cryptocurrencies as alternatives to the greenback.

“It’s the beginning of the end,” for central banking and the U.S. dollar, Zhou declared.

Critics of privately issued and open-source cryptocurrencies argue that if they displace national currencies, they would undermine the ability of national governments and central banks to effectively regulate the economy. They also argue that Americans, in particular, benefit from the status of the dollar as the world’s reserve currency.

But supporters of the incumbent banking system expressed skepticism that recent state-level proposals would do much to upset the current system, pointing to potential legal and practical hurdles.

“I see this as much more of a stunt than genuine shakeup,” said Rohan Grey, who serves as research director of the Digital Fiat Currency Institute, a San Francisco-based trade group that represents government bodies and financial institutions. The group supports the issuance of digital currencies by central banks as a government-controlled alternative to privately issued or open-source cryptocurrencies.

One potential obstacle to proposals like this in Arizona and Wyoming is Article I, Section 10 of the Constitution, which restricts the power of states to issue their own money.

The Arizona bill, according to Grey, faces a greater risk of being deemed unconstitutional because it seeks to designate a cryptocurrency as “legal tender.” This has broader implications than the Wyoming proposal, which is limited to tax payments.

He said it is unlikely that courts would actually strike down Wyoming’s proposal on constitutional grounds, in part because of precedent permitting privately issued money and in part because any such ruling would have implications for existing tax credit systems used by states.

Instead, as the federal government gears up to more extensively regulate cryptocurrencies, Grey said Congress could simply pass a law banning the practice.

Grey, who also works as a law professor at Willamette University in Salem, Oregon, predicted that a bigger problem than regulation would be a lack of interest. Many cryptocurrencies have wildly fluctuating values, which undermines their practical value as forms of money. “The volatility of these instruments will do more damage than a legal response,” he said.

While crypto supporters contend that some digital currencies are pegged to the U.S. dollar or to baskets of goods and services, limiting their volatility, early attempts to let taxpayers in the U.S. pony up in crypto have proven to be busts.

In 2018, Ohio’s then-treasurer, Republican Josh Mandel, unveiled a program to let businesses pay some taxes in Bitcoin, the most popular cryptocurrency. Soon after he left office, his successor shuttered the program, which the state’s attorney general concluded was not properly authorized.

A spokesperson for the Ohio Treasurer’s office, Brittany Halpin, said that fewer than 10 businesses took advantage of the program during the 10 months it was active.

Also in 2018, Seminole County, Florida’s then-tax collector, Republican Joel Greenberg, said he would take payment for some fees in Bitcoin. But Greenberg’s tenure was cut short by a federal indictment. He has since pleaded guilty to a raft of charges, including for embezzling county funds to purchase cryptocurrency.

A spokesperson for the Seminole County Tax Collector’s Office, Alan Byrd, said that the office no longer takes payments in cryptocurrencies and that no one had submitted any such payments when it did.

Several other U.S. jurisdictions are investigating the possibility of taking such payments. Last year, Colorado Gov. Jared Polis, a Democrat, said he wants his state to be the first to accept taxes in crypto. The mayor of Jackson, Tennessee, has said the city is studying how it might take property tax payments in digital currencies, and Miami-Dade County is examining similar possibilities.

While the race to implement the first successful program is on, it is shaping up to be more of a marathon than a sprint.

In addition to the constitutional issues posed by the Arizona bill, its prospects are complicated by its sponsor, Republican Sen. Wendy Rogers.

Rogers, who did not immediately respond to a request for comment, has been a vocal proponent of the false claim that former President Donald Trump won the 2020 election and featured prominently in a recent report by the Anti-Defamation League on extremism in American politics.

Meanwhile, lawmakers in Wyoming resolved law week to study the sales tax proposal rather than push ahead on it.

Andrew said he plans to work with the state’s Department of Revenue and to introduce an updated proposal next year. He said he remained more focused on the nitty-gritty details of his sales tax proposal than any sweeping implications it might hold for the future of money.

Ben Schreckinger covers tech, finance and politics for POLITICO; he is an investor in cryptocurrency.