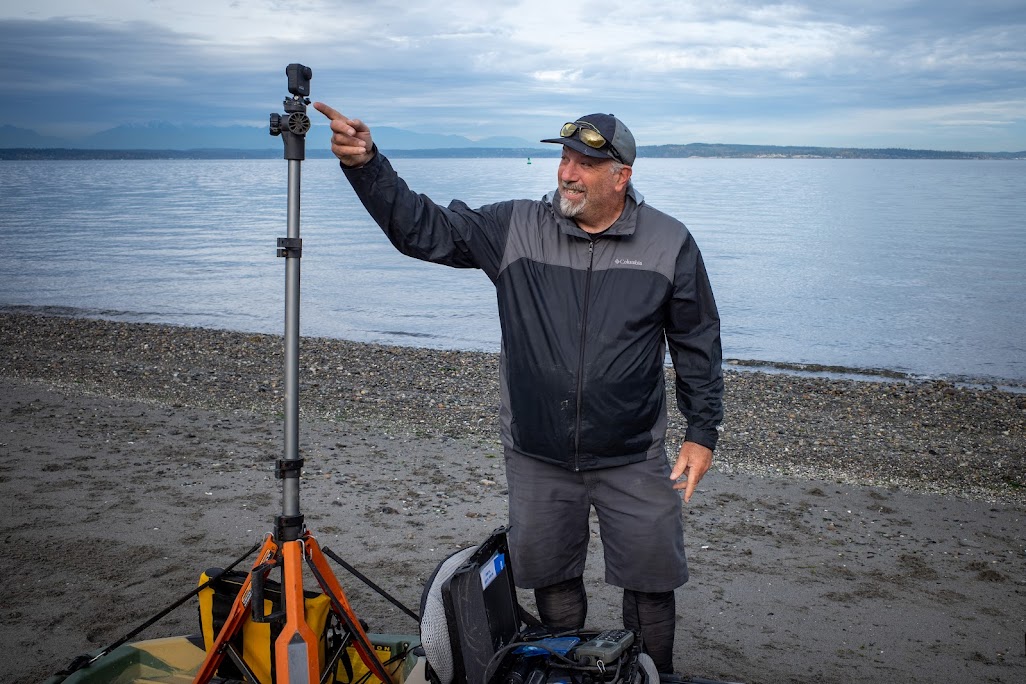 We’ve all indulged in a little voyeuristic spying and exploration using Google Maps’ Street View, peering at homes and other landmarks.

Brian Footen is creating a similar experience for shorelines — but with a greater purpose in mind. He wants to help save Puget Sound, the region’s environmental jewel. Because while Washington’s inland sea looks beautiful from the surface, it’s ailing on many fronts. Populations of salmon, orcas and seabirds are declining. The water is becoming more polluted and acidic. Underwater forests of kelp and eelgrass are shrinking.

“The people who are going to have the biggest effect in protecting Puget Sound are going to be you and me,” said Footen, standing on a sandy patch of beach in north Seattle. “And the more peoples’ eyeballs that we can get on it, the better the chance that we can get some momentum.”

Footen is a co-founder and president of EarthViews. The Seattle startup surveys shorelines, rivers, stormwater systems and other natural spaces to create interactive, online maps with 360-degree views of locations. Its platform layers the maps with additional data like water quality or wildlife sightings, allowing users to delve into a geographic area.

This summer Footen launched a crowdfunded campaign to create a shoreline-view map of Puget Sound, beginning with a 120-mile stretch from Olympia to Seattle. The funding effort has been successful and most of the route is already viewable online.

EarthViews is a two-employee, for-profit business. Its customers and partners include National Geographic, the GIS company Esri, NASA, Native American tribes and conservation groups. It has worked in multiple states with engineering firms and government agencies that manage floods, public ports and national parks.

The Puget Sound initiative is a public-service, passion project for Footen. His goal is to map the waterway’s entire 1,200 miles and share the journey with the public, decision makers and scientists. In his plastic, camouflage-patterned fishing kayak, Footen can cover about 10-to-15 miles a day. He’s limited to windless, rain-free weather for his image and data collection.

“It’s comically impossible for me by myself, but I’m going to do it,” he said. “It’s my mission.”

From salmon to startups

Before venturing into entrepreneurship, Footen spent decades working as a fish biologist, first with the U.S. Fish and Wildlife Service, then with Puget Sound tribes.

Part of his job was counting salmon redds, which are the nests of salmon eggs deposited in rivers and streams. He began brainstorming ways to capture the areas with images to share with people working to restore wild areas, but who don’t often get to visit the field. His ruminations eventually led Footen to explore the idea of creating Street View-like images for natural spaces.

And so beginning around 2013, he and his partners started experimenting with available tools, gluing a half-dozen cameras in a ring around a dinner plate to create 360-coverage once the images were stitched together. As technology improved, the six cameras became one GoPro. EarthViews temporarily employed two engineers to build its platform, which integrates and displays the geolocated images and data.

In 2016, Footen quit his biology job and went full time with EarthViews. The startup has raised a few hundred thousand dollars in angel and seed investing, Footen said.

One of EarthViews’ customers is Enginuity, a Colorado-based water resources engineering firm whose clients include government agencies. The company has partnered with EarthViews to survey drainages, rivers and streams to document their conditions and identify problems.

“All of the clients have loved having the ability to tour their watersheds and streams while sitting at their desktops,” said Jeffrey Sickles, a principal with the company.

In a project with the Quileute Tribe, EarthViews collected imagery of the Quillayute River on the Olympic Peninsula that allowed for virtual site visits during the COVID pandemic, said Nicole Rasmussen, a biologist for the tribe. “This project really helped us showcase the issues we have,” Rasmussen said, leading them to secure funding for restoration efforts.

For the Puget Sound project, Footen is doing most of the data collection himself, paddling his kayak 15 feet or less offshore. He’s often in water only a couple of feet deep.

“I hit stuff all the time,” he said, making a powerboat impractical. His rig includes a device that automatically samples water quality every 10 seconds, including temperature, acidity, oxygen levels and other parameters, recording the data and location of the sample. Footen also takes audio notes on his phone to document wildlife sightings.

The state’s Department of Ecology has previously used helicopters to do shoreline surveys of Puget Sound. Footen argues that his approach is superior, and evokes fine art to illustrate the difference. If the shoreline was a masterpiece by Gauguin or da Vinci, for example, the helicopter allows you to see it from across the room; the view from the kayak brings you in close to see the metaphorical “brushstrokes” of the landscape.

“You get so much detail,” he said, “and a whole different perspective.”

‘This is what I want to do’

Footen sees a three-fold objective for the Puget Sound project: engage the public, collect scientific data and create a powerful visual record of the region, which is undergoing significant changes due to development, climate change and other influences.

During his mapping sojourns, Footen has been surprised by the amount of wildlife that he’s seen in urban and industrial stretches. He tallied 140 seals in the Tacoma area and almost a dozen bald eagles. Near the Tacoma Narrows, he spotted a Brown Pelican, a rare sight in the area. The trained biologist was disappointed by the amount of shoreline “armoring” that he has encountered; the massive boulders and cement walls that line the shore can lead to the erosion of beaches and loss of habitat for marine life.

While EarthViews has a list of notable customers, Footen says it’s been challenging to grow his startup, even with proven technology. He marveled at the success of Mapillary, a Swedish company that creates street-level imagery that raised roughly $25 million before Facebook acquired it last year for an undisclosed sum.

But he has no plans to hang up the paddle.

“When I was on the water the day before yesterday, I realized that no matter what happens, this is what I want to do for the rest of my life,” Footen said. “I want to be on a watercraft mapping the waterway. I don’t want to just be a kayaker, someone who floats around. I want to make sure I’m out there with a purpose.”