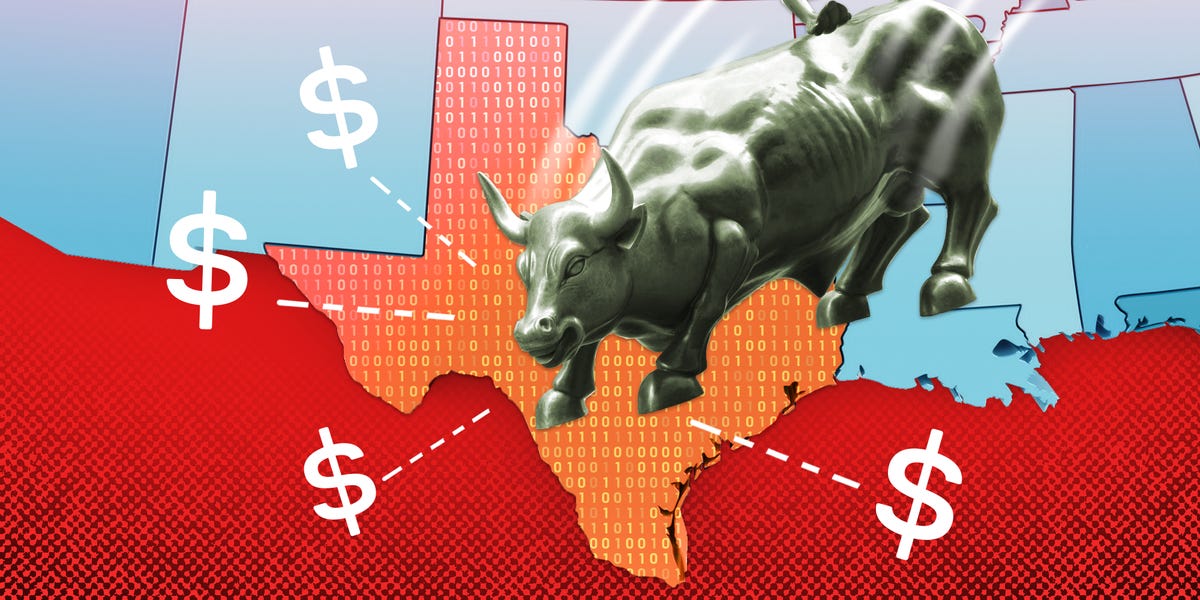 When Jeremy Hanson moved to Dallas — about 1,500 miles from the Goldman Sachs brain trust in New York — in 2017, he was one of only three engineers for the bank’s consumer business working in Texas. Today, there are hundreds, Hanson told Insider.

But it’s not just the consumer team that’s rapidly growing in the state. Goldman’s presence in the Dallas area — which mirrors the New York headquarters in department representation — numbers just shy of 4,000 employees in total, nearly double the bank’s head count from less than a year ago, it said. And of those Dallas employees, nearly one in four works in the tech organization.

“When we chose Dallas, it was really around the opportunity for sourcing talent,” Hanson said, citing the abundance of tech graduates in the state.

After all, Texas engineers have been behind every recent product launch within the bank’s consumer division, beginning with personal loans in 2016.

In fact, Wall Street at large is placing a stake in Texas as it looks to strengthen its tech workforce, eyeing both the fresh-out-of-college tech talent and the lower costs than those of longtime tech hubs like San Francisco and New York.

JPMorgan, Citi, and the hedge fund Two Sigma have also built financial-tech foundations in Dallas, Irving, and Houston, respectively. Wells Fargo, which wants to bring on 2,000 technologists this year, is also setting its sights on the Dallas area. Meanwhile, the $7.2 trillion asset manager Vanguard is set to open its new Plano office, home to front- and back-office employees supporting its financial advising services, this quarter.

The saying goes that everything’s bigger in Texas. And while no state is immune to the red-hot battle for tech hires, the Lone Star State’s vast tech talent pool is quickly turning the state into a key battleground in the relentless war for tech talent. Now competition getting even tighter as financial firms increasingly enter the fray, diverting tech workers away from Amazon, Oracle, Dell, and other tech giants.

Dallas is home to a growing cohort of people who fit within “prime working age,” Steve Hagerman, the chief technology officer at Wells Fargo, told Insider, referring to those between the ages of 23 and 38, an age bracket that grew roughly 15% from 2014 to 2019, according to 2019 data from the Bureau of Labor Statistics. Dallas is also one of the top up-and-coming markets for tech-degree completion, he said, with a 71% increase over the prior five years, according to the Bureau.

“If I look at the Bay Area or the New York area, there are skill sets that are just more advanced there,” Hagerman told Insider. “But when I look at a place like Dallas, I’ve got 6,672 tech-degree completions a year and then almost 200,000-person-strong tech market.”

Plus, it’s cheaper from a corporate view. The algorithm Wells Fargo uses to estimate the annual cost of the presence of 500 workers shows Dallas costs $46 million, compared with a $68 million price tag in San Francisco and $59 million in New York City.

Numbers are an important factor for Wells Fargo, which is looking to hire software developers, database and systems-technology engineers, and engineering management. The firm’s Addison office is home to 3,000 corporate (nonbranch) workers, with about 1,000 of those in the tech org, Hagerman said. As for how many of the new hires will be in the Dallas area, that office will undergo “unconstrained growth,” he added.

Meanwhile, one of the largest investment managers, Vanguard, is about to move into its new office complex about 10 miles north after spending about $7 million on renovations. The Plano campus, which is set to open in the second quarter of this year, will be home to financial advisors and back-office tech roles with an emphasis on UX designers, cloud-native architecture engineers, infrastructure engineers, and security teams, Joel Dickson, its global head of advice methodology and a senior leader in the new office, told Insider.

Vanguard has been on a hiring spree for that office since November, Dickson said, adding that over the next several years, the firm expected it to house hundreds to thousands of employees.

“Talent availability is going to drive growth in that region,” Dickson said.

Citi, which has long had financial-tech operations scattered across Texas, houses the bank’s largest technology workforce about 20 minutes away in Irving. It’s a hub for the bank’s mobile and online applications, Shadman Zafar, the global head of technology for Citi’s personal-banking and wealth-management business, told Insider.

The Irving campus has more than 10,000 employees, with the tech workforce — made up of software developers, data and machine-learning engineers, infrastructure teams, product managers, and two global command centers — accounting for the vast majority of workers, Zafar said. And that share is set to grow, with more than half the bank’s open head count for Irving in tech, he added.

Two Sigma, the quantitative fund founded by the billionaires John Overdeck and David Siegel, is also growing its Houston footprint, a key location for the New York fund since the office was established in 2005.

Quant funds rely on computer-based and mathematical modeling to make their bets in the market, and Two Sigma is known for pushing the boundaries on computing and data usage, even among its quant peers.

The $58 billion fund has 80 employees in its software-engineering hub, where its technologists are tackling everything from distributed-computing platforms to big data and financial optimization, Jim Ward, a managing director and the general manager of Two Sigma’s Houston office, told Insider. Nearly every engineering vertical is represented in Houston, he added.

Two Sigma is set to add more than 200 engineers to the firm this year, and Houston will be a “key area of focus for growth,” Ward said.

While financial firms started growing their tech operations in Texas only in recent years, the state was already home to several tech companies. Texas Instruments and Electronic Data Systems, the information-technology company founded by Ross Perot, for example, were both founded in Dallas. The area also has a burgeoning biotechnology and life-sciences industry.

Tech companies including AT&T, Dell, and Oracle also have strong ties to the state, while Big Tech firms like Amazon and Google have steadily grown their operations in the Dallas and Austin areas. And now, the insurgence of financial firms is diverting a trusty pipeline of new grads away from the traditional tech firms, according to university career-development executives.

Linda Parker has helped engineering students at Dallas’ Southern Methodist University land jobs at top local firms like AT&T, Deloitte, and Texas Instruments for almost 10 years as the director of career development at the university’s Hart Center for Engineering Leadership. In recent years, she’s noticed a growing number of students accepting offers with financial firms like JPMorgan and Goldman Sachs as they’ve expanded their operations in the Dallas area.

“I’ve seen this trend where you have a lot more financial-service-type companies that are recruiting engineers because they need that mindset, that different approach to problem-solving,” Parker said.

The demand for technical talent spans the state, with engineering students from the University of Texas at Austin also taking more jobs in fintech in recent years. Michael Powell, the director of the school’s Engineering Career Assistance Center, said that over the past decade, he’d seen students’ interests broaden to include business and finance knowledge alongside their technical skills.

As a result, both UT Austin and SMU have revamped their academic offerings, hoping to better prepare students for a job market where technical skills are more desirable than ever. UT Austin’s McCombs School of Business is now home to a blockchain initiative to help students research and better understand topics like cryptocurrency and digital payments, for example. Additionally, SMU’s revamped curriculum for MBA students, released in 2020, puts an emphasis on data analytics and project-based learning.

Key execs aren’t exempt from the Texas migration, with several ditching their New York headquarters for the state

The Texas boom, initiating at the ground floor with college graduates, is also drawing in financial executives at the most senior levels.

Goldman’s continued investment in the area, which has mostly been concentrated over the past five years, is largely in response to a growing number of clients in the area, as well as a budding tech ecosystem that’s producing top-tier talent, according to Ram Narayanan, Goldman’s head of Dallas engineering.

Narayanan is just one of several leaders the firm has recently relocated to Dallas from its New York headquarters. Others are Liz Martin, the bank’s head of large partnerships and embedded consumer finance, and Stephanie Cohen, a global cohead of Goldman’s consumer and wealth-management divisions. Cohen, for her part, has emerged as a prospective successor to CEO David Solomon.

“There’s been a concerted push from the very top of the firm to ensure that we make the right investments in our offices in Dallas, and that’s been a consistent theme across the years. There’s definitely been a lot of excitement about the quality and quantity of talent that we’ve been able to find,” Narayanan said.