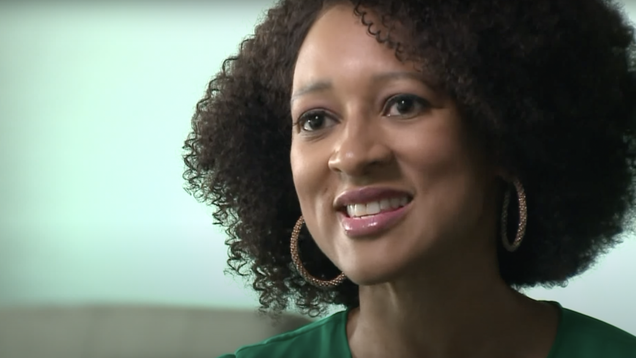 “Heaven gained its sweetest angel back,” read an online tribute to Chris-Tia Donaldson, founder and CEO of Thank God It’s Natural—also known as TGIN. Donaldson, a pioneer in the natural haircare industry and a self-described “Breast Cancer Thriver,” died on Saturday, November 13, as confirmed in a social media message by her niece and finance and HR manager, Aris Singleton.

“TGIN and the TGIN Foundation has lost a leader and a visionary and the world has lost a selfless and beautiful human being,” said Singleton, in part. “Chris-Tia lived a life of service and was a force to be reckoned with inside and outside of the beauty community. Through her passion and purpose, she redefined beauty and created a community of women empowerment teaching us the importance of advocating for ourselves, especially our health,” Singleton continued, later adding: “The entire TGIN family mourns the tremendous loss. No words can adequately express that sadness or the love we have for her.”

While no formal cause of death was given, the company posted a tribute to Donaldson bearing a quote from her 2019 book, This Is Only a Test: What Breast Cancer Taught Me about Faith, Love, Hair, and Business.

“Cancer is just one storm. It didn’t define me,” it read. “You don’t have to let it define you.”

The book was the Detroit native’s second, following 2009’s Thank God I’m Natural, which would soon after inspire her similarly named haircare line. Both were dedicated to helping women appreciate and care for their natural hair, as Donaldson had taught herself to do in the early aughts after transitioning back to her own natural texture amid a thriving corporate career.

A graduate of Harvard undergrad and law school, Donaldson was working full-time as an attorney when she launched TGIN in 2011. In March 2015, the brand hit a major reached milestone when it reached the shelves of 250 Target stores nationwide—but in December of that same year, Donaldson was diagnosed with breast cancer.

According to the Chicago Defender, Donaldson would survive two breast cancer diagnoses during her lifetime—but neither stopped her drive. As Donaldson recovered from that initial diagnosis, TGIN became a force in the natural hair community. Today, it is a multimillion-dollar brand available in over 10,000 stores nationwide, including Target, Ulta, Walmart, and Whole Foods—a tremendous feat for a Black business owner.

As news of Donaldson’s passing spread, many of her contemporaries in the Black beauty space—including Curlbox founder Myleik Teele, Lisa Price of Carol’s Daughter, and Monique Rodriguez of Mielle Organics—remarked on Donaldson’s warmth and generosity of spirit.

“She was such a light,” wrote Cashmere Nicole of Beauty Bakerie, a fellow breast cancer survivor. “Carried herself with so much grace and concern for others. May God be with you all during this time. We will miss Chris-Tia tremendously.”

“I’m so sad for this loss. I’m praying for you all,” wrote Melissa Butler of The Lip Bar. “Chris-Tia was so honest, so unrelenting, so bright! and I always admired her for that. May she rest peacefully.”

Our condolences to Donaldson’s family and Team TGIN for the loss of their vibrant and compassionate leader.