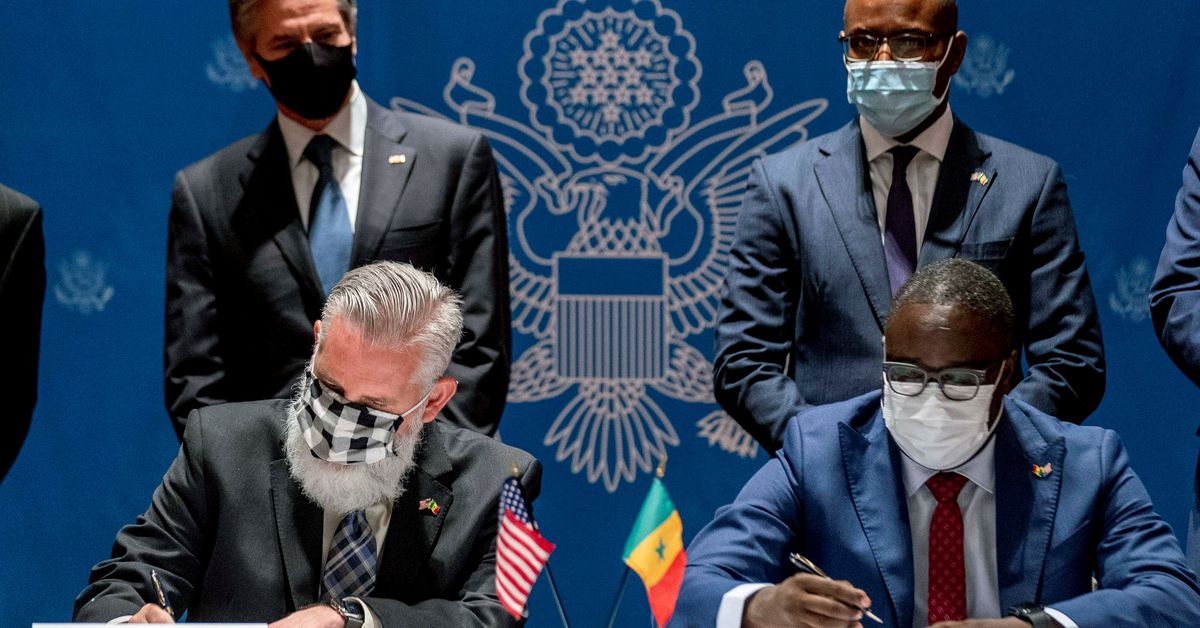 DAKAR, Nov 20 (Reuters) – U.S. Secretary of State Antony Blinken said on Saturday his country was investing in Africa without imposing unsustainable levels of debt, as he witnessed the signing of contracts worth more than $1 billion in Senegal’s capital Dakar.

The deals between four U.S. companies and Senegal are being billed as part of his country’s pitch to help Africa build infrastructure with transparent and sustainable deals. read more

Careful not to directly criticise Chinese infrastructure projects, which have proliferated across the continent in the past decade, Blinken said during a visit to Nigeria on Friday that international deals were too often opaque and coercive.

The U.S. is investing “without saddling the country with a debt that it cannot handle,” he said during the signing ceremony with Senegal’s Economy Minister Amadou Hott.

He said he had a deep concern for the stability of neighbouring Mali, which has experienced two coups in the last 18 months, and that the upcoming election there must follow a timetable drawn up by the regional bloc ECOWAS.

Earlier this month ECOWAS, West Africa’s main political and economic bloc, imposed sanctions on Mali’s transitional leaders, after they informed the organisation they would not be able to hold presidential and legislative elections in February.

“We look forward to resuming the full array of assistance as soon as this democratically elected government takes office,” Blinken told reporters.

U.S. Secretary of State Antony Blinken and Senegal’s Minister of Economy, Planning and International Cooperation Amadou Hott watch on as the Vice President and General Manager of Cubic Transportation Systems Jeff Price and the Director General of CETUD Thierno Birahim sign an agreement during a commercial diplomacy event with U.S. companies and the government of Senegal at the Radisson Blu Hotel in Dakar, Senegal November 20, 2021. Andrew Harnik/Pool via REUTERS

Reuters reported in September that Mali’s military junta was in discussions about deploying a Russian military contractor, Wagner Group, in Mali to help fight a growing Islamist insurgency. read more

“It would be especially unfortunate if outside actors engaged in making things even more difficult and more complicated and I’m thinking particularly of groups like the Wagner Group,” Blinken said.

Blinken said the U.S. has real concerns, widely shared with partners in Europe, over Russia’s “unusual activity” at the Ukrainian border, after Ukraine said it feared Russia might be preparing an attack.

“We do know the playbook of trying to cite some illusory provocation from Ukraine or any other country and using that as an excuse to do what Russia was planning to do all along,” Blinken said.

Intensive diplomacy was ongoing to end civil conflict in Ethiopia, he said, where Washington continues to push for an immediate end to hostilities without preconditions and humanitarian access to millions of people in the north.

During a visit to Dakar’s Institute Pasteur bio-medical research center, Blinken said the United States was working with partners to generate more financing for vaccine manufacturing in Senegal.

In October BioNTech (22UAy.DE) signed an agreement with the Institut Pasteur de Dakar and the Rwandan government to construct the first mRNA vaccine facilities in Africa, starting in mid-2022.