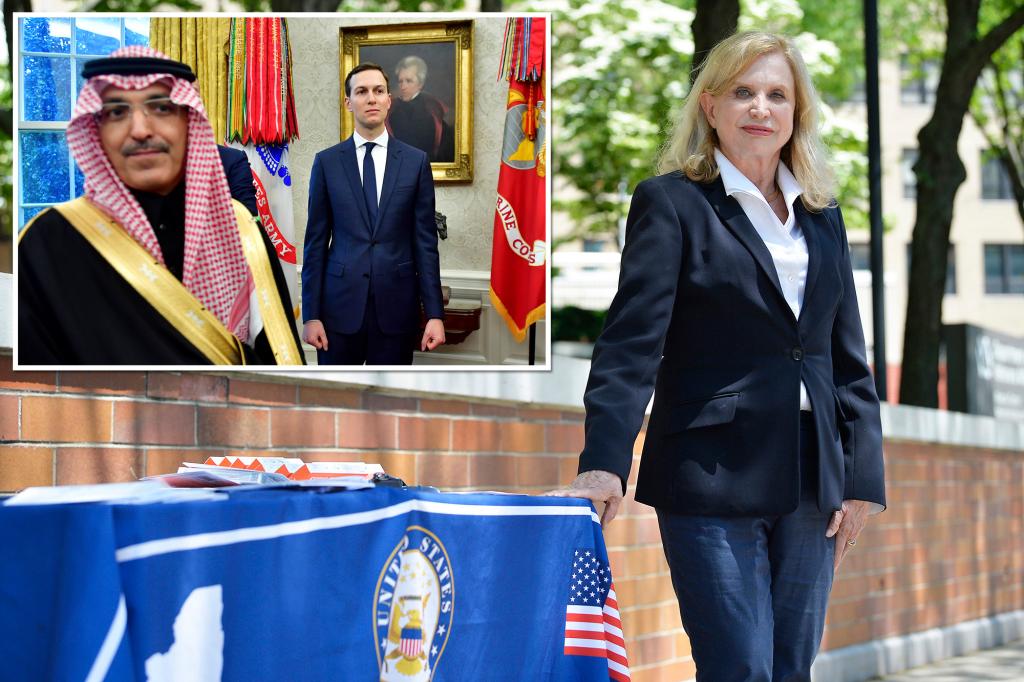 Facing a tough primary challenge from a known Donald Trump-basher, Rep. Carolyn Maloney is demanding that former first son-in-law Jared Kushner hand over records of his communications with Saudi Arabia about a $2 billion investment in Kushner’s investment fund Affinity Partners.

Maloney (D-NY) wrote in an eight-page letter Thursday that she wants to determine if new laws are needed to restrict the actions of former US officials, but she didn’t allege possible violations of existing laws.

Maloney, the House Oversight Committee chair, is being challenged for her political survival in a primary election Aug. 23 by fellow longtime Rep. Jerry Nadler (D-NY), chairman of the House Judiciary Committee, who was far more prominent than Maloney in going after then-President Donald Trump.

The Upper West Side to Upper East Side district skews solidly blue with a strong progressive and left-leaning constituency that is largely anti-Trump.

“Obviously it is a primary play to make her look tougher than Nadler,” a Republican operative said, adding, “Democrats are bracing themselves for the Hunter [Biden] investigations, so this an exercise in muddying the waters.”

A different person said Kushner didn’t receive a copy of the letter from Maloney’s office, indicating it was sent first to the media rather than its named recipient.

Maloney’s letter demands a copy of “[a]ll communications between you and Crown Prince Mohammed bin Salman or other Saudi officials from January 2017 to the present,” as well as documents directly related to the $2 billion investment.

The oversight committee “is investigating whether you have improperly traded on your government position to obtain billions of dollars from the Saudi government and whether your personal financial interests improperly influenced U.S. foreign policy during the administration of your father-in-law, former President Trump,” Maloney wrote.

“This investigation will inform the Committee about whether federal ethics laws should be strengthened to prevent senior public officials from taking advantage of their position within the federal government to reap a financial windfall—before, during, or after government employment.”

A Kushner spokesman said, “While achieving six peace deals in the Middle East, Mr. Kushner fully abided by all legal and ethical guidelines both during and after his government service. He is proud to be among many private sector stakeholders advancing connectivity between Americans, Israelis and Arabs to encourage continued regional progress.”

Some of the documents from Kushner’s four years in the White House may be held by the Biden administration or protected by executive privilege and Maloney will have a narrow window to pursue her inquiry if Republicans retake the House as expected in the November midterm elections.

Maloney has not taken on a similar role investigating influence-peddling allegations against President Biden and his son. Emails from Hunter Biden’s laptop indicate his father was aware of and involved in business deals in China and Ukraine.

Republicans are expected to aggressively investigate Hunter Biden’s overseas business deals and his father’s possible involvement if they retake power in Congress.

Maloney’s letter is dated Thursday, the same day as reports that Biden may visit Saudi Arabia on a make-up mission to woo Crown Prince bin Salman, whom he had sought to sideline over human rights issues including the 2018 operation that killed US resident Jamal Khashoggi, a Washington Post columnist.

Biden’s trip would coincide with his push for the Saudis to produce more oil to lower US energy prices and tamp down four-decade-high inflation.

Then-President Trump condemned Khashoggi’s murder and alleged dismemberment by Saudi agents in Istanbul, but refused to break with the crown prince, arguing that the US-Saudi security and economic relationship was too important.

Kushner served as one of his father-in-law’s top advisers on the Middle East and helped broker establishment of diplomatic relations between Israel and five predominately Muslim countries — Bahrain, Kosovo, Morocco, Sudan and the United Arab Emirates.

Kushner, now 41, reached a deal with the Saudi Public Investment Fund to receive the $2 billion investment less than a year after his father-in-law left office, raising questions about whether any of his actions in government were influenced by the potential deal.

The investment could result in annual management fees of about $25 million.

While critics say that the investment could be a conflict of interest if Trump wins a second term in 2024, Kushner’s defenders point to his reported plan to invest Saudi money in Israel and emphasize his prior business experience, including his role running his billionaire father’s real estate empire while Charles Kushner was in prison in the early 2000s.