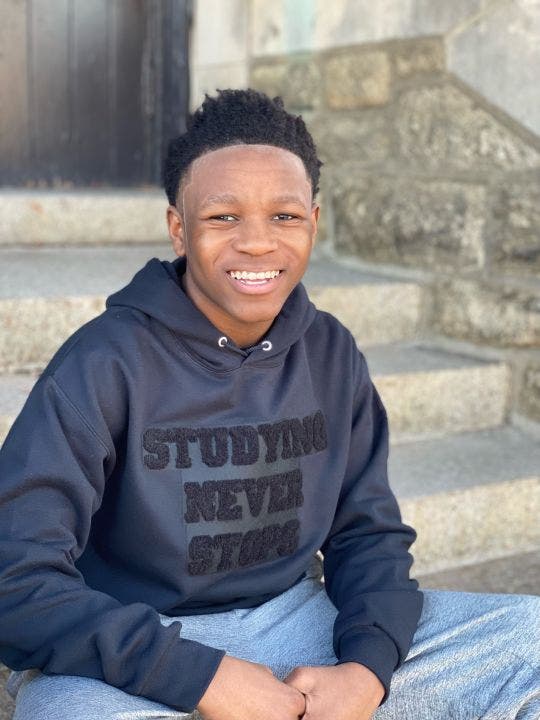 Brandyn Ross, 13, is the owner of Studying Never Stops – a clothing brand that promote learning.

Brandyn Ross is proving to the world that anyone can start a business at any age with his motivational clothing brand Studying Never Stops.

At 13 years old, Brandyn has been selling hoodies, t-shirts, tote bags, crossbody bags and trucker hats that feature the company slogan he came up with at age 11 — which happened during one of his trips to a barbershop, he told FOX Business in a phone interview.

“I was reading a book under the dryer when I realized that you never stop learning in life,” Brandyn said. “I went up to my mom and I was like, ‘studying never stops.’”

BABY INFLUENCERS: HOW INFANTS AND KIDS ARE MAKING BIG BUCKS ON SOCIAL MEDIA

He asked his mother — Brandi Battle-Ross — if she could help him make a shirt that said Studying Never Stops.

The mother-and-son duo worked through a few different designs before they landed on a bold font that caught the public’s attention in West Oak Lane, a neighborhood in Northwestern Philadelphia.

After they received positive feedback from their community, Brandyn began selling his Studying Never Stops merchandise at popup shops and malls throughout the city.

“It’s been an exciting journey for us as a family because we’ve all supported Brandyn through this,” Brandi told FOX Business, noting that her husband, daughter and aunt also help out when Brandyn run his stalls in malls.

Brandyn Ross told FOX Business that he first got the idea to start his apparel business Studying Never Stops while he sat under a dryer in a barbershop. He was reading a book at the time of his realization.

“We’re all learning and growing with Brandyn as his business grows,” Brandi continued. “I’m actually studying entrepreneurship because he’s inspired me.”

FROM COMBAT BOOTS TO PUMPS, HOW ONE VETERAN IS CAPITALIZING ON FASHION

Before Brandyn started his Studying Never Stops apparel business, he felt the spirit of entrepreneurship at age 9.

Brandyn recalls that he felt motivated to start a business after he heard a bishop at the New Covenant Church of Philadelphia say, “Find something that you love and turn it into a business.”

As a fan of basketball and books, Brandyn came up with a purpose-driven Basketball Bracelets 4 Books business in which he sold basketball-themed bracelets and used 10% of the proceeds to buy and donate books to barbershops, barbershops, schools and lunch programs in Philadelphia.

‘SUPPORT BLUE COLLAR’ APPAREL COMPANY A BOON FOR US VETERANS

Brandyn Ross has used 10% of the proceeds from his clothing businesses to buy and donate books to barbershops, barbershops, schools and lunch programs. (Brandi Battle-Ross)

Brandyn told FOX Business he plans to focus on growing Studying Never Stops, but he continues his book donation initiative that aligns so well with his brand.

“We will take all types of books so kids and adults can read when they have downtime,” Brandyn said.

Aside from selling merchandise online and in malls, Brandyn has an educational element to Studying Never Stops: He visits schools and shares his story to inspire fellow entrepreneurs.

GET FOX BUSINESS ON THE GO BY CLICKING HERE

The business venture has resonated with everyone from children his own age to people who are in their 80s, Brandi told FOX Business.

While Brandyn Ross is a teenage entrepreneur, his business journey has inspired people of all ages. (Brandi Battle-Ross)

When asked if he had any piece of business advice to offer young or aspiring entrepreneurs, Brandyn said, “You should never give up.”

He continued, “Even if people say that your business isn’t cool or what you’re doing doesn’t seem fun to other people … it may be fun to you. If you really want it to grow and you really want to get it out there, you should continue to do it and make sure you try your best and do what you can do.”