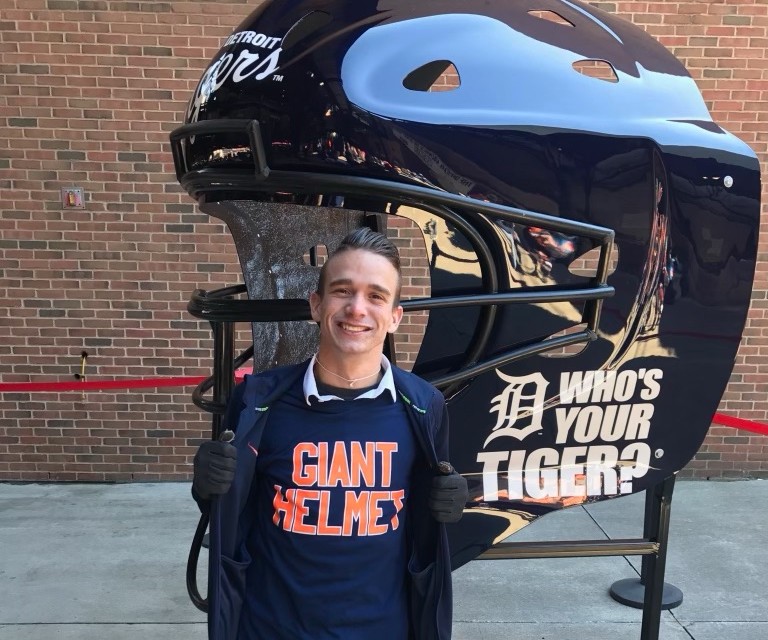 Steven Strickland has a port in his chest, a bacteria-fueled cough in his lungs and cystic fibrosis hanging over everything.

He’s 28 years old and doesn’t know if he’ll see 30. He’s in and out of the hospital like it’s the corner store. He could go on full-time disability, but is adamant about working at the Genius Bar of the local Apple Store, no matter how exhausted he gets dragging himself there.

“If I was on disability, I’d feel like I was quitting,” Strickland said. “I would be declaring that cystic fibrosis had won and I’m raising the flag … cystic fibrosis is a disease that will ultimately win the war. But I can win all the battles until then.”

This guy, Strickland, who hails from Sterling Heights, Michigan, who has had nearly every break breaking against him, who is rail-thin but wears a beaming smile, is somehow thankful for plenty this Thanksgiving.

For time with his family, of course. And a second helping of his mom’s stuffing, of course. “So tasty,” he notes. But also because each day brings another opportunity to grow his start-up business – naturally he’d be plowing ahead with grand visions of toppling industry.

The company is called Giant Helmet and it is, well, about giant helmets. It’s part art, part sports and all cool.

Strickland was struck years back by the designs on hockey masks, which are often elaborate paint jobs that reflect the passions of the player. He really liked the work of his cousin Gerald, an airbrush artist up in Pickering, Ontario, who created them for local goaltenders.

The problem, as Strickland figured it, was that unless you were holding the mask, you couldn’t see the details. It was so small that even the fans in attendance couldn’t see what was on it.

So what if they were made big? Like real big?

The concept – as most in businesses do – soon morphed into something tangible. What if they created huge fiberglass molds, had Gerald paint whatever design a customer wanted, and then delivered them as sort of a promotional piece or collector’s item or who knows what?

They made a prototype with the Detroit Red Wings logo on it and gifted it to the team in April of 2016 to commemorate the franchise’s 25th consecutive playoff appearance. The Wings put it outside Joe Louis Arena.

It was an instant sensation, the kind of unique, fun item no one was expecting. Fans flocked to it, lining up to first gawk and then to snap pictures which they posted on their social accounts.

It was exactly how Strickland envisioned it. As social media consumes a great amount of advertising attention, what better way to get a logo out in front of people than through organic posts from their friends? Maybe, he thought, this could be a business.

What’s this worth to a professional sports franchise? Or a college team? Or even a high school or a sports bar or a small auto repair shop looking for a sort-of digital tchotchke item?

If companies – including even NHL and NFL teams – buy boxes of golf tees and beer koozies and bobblehead dolls in the hope someone reads their logo, then why not just get one big fun thing and let it get splashed across Instagram and Facebook for years on end?

It is. But there is a cruelty to having a young, ambitious person who is both bitten by the entrepreneurial bug yet facing limited time to build the business, not to mention endless health flare-ups – a week-long hospital stay here, 10 more days there – that derails consistent progress.

There has been progress, though. Strickland found a fiberglass manufacturer who can make not just the goalie masks but just about anything that can be painted up. Football helmets. Golf balls. Soccer balls. Hockey pucks. Catcher’s masks. Even players.

They made one on spec for the NFL’s Detroit Lions. They’ve worked with the NHL’s Edmonton Oilers and Winnipeg Jets, plus the minor league Windsor Spitfire. Canadian Tire and the Molson Brewing Company bought some.

The goal is to get costs low enough to convince smaller businesses and restaurants that putting your logo on an Instagrammable giant football helmet is worthy of promotional and advertising dollars.

Professionally, it’s gone about as well as possible, especially considering this is practically a one-man shop and Strickland can never seem to apply enough time to it due to his illness. It remains a challenge to navigate trademarks, set up meetings that he’s never sure he’ll be healthy enough to attend, and deal with the unreturned phone calls or brush-offs by sports leagues or teams.

“No one knows who I am or what I am doing,” Strickland laughs.

He’s undeterred, of course. By anything. He remembers being about 12 years old and although he had always known he was sick, as a kid some of the realities were shielded from him. So he googled “cystic fibrosis.”

He discovered young that he’d never be old.

“The concept of time just got totally jacked for me,” Strickland said.

So here as another Thanksgiving that was never promised arrives, here as another plate of his mother’s stuffing will appear, Steven Strickland is thankful that he’s still living, still learning and still with the energy and gumption to try to build out a company that he knows can work. At least if he can just have the time to see it through.

“This is art,” Strickland said. “I want people to love it. I want them to have fun with it. And they do. They stand next to it. They climb inside it. They post it all over social media. I love that.”

Giant helmets? Sure, giant helmets that serve as a canvas for art that can last for decades.

“I’m short on time,” Strickland said, “but this is a way to be timeless.”