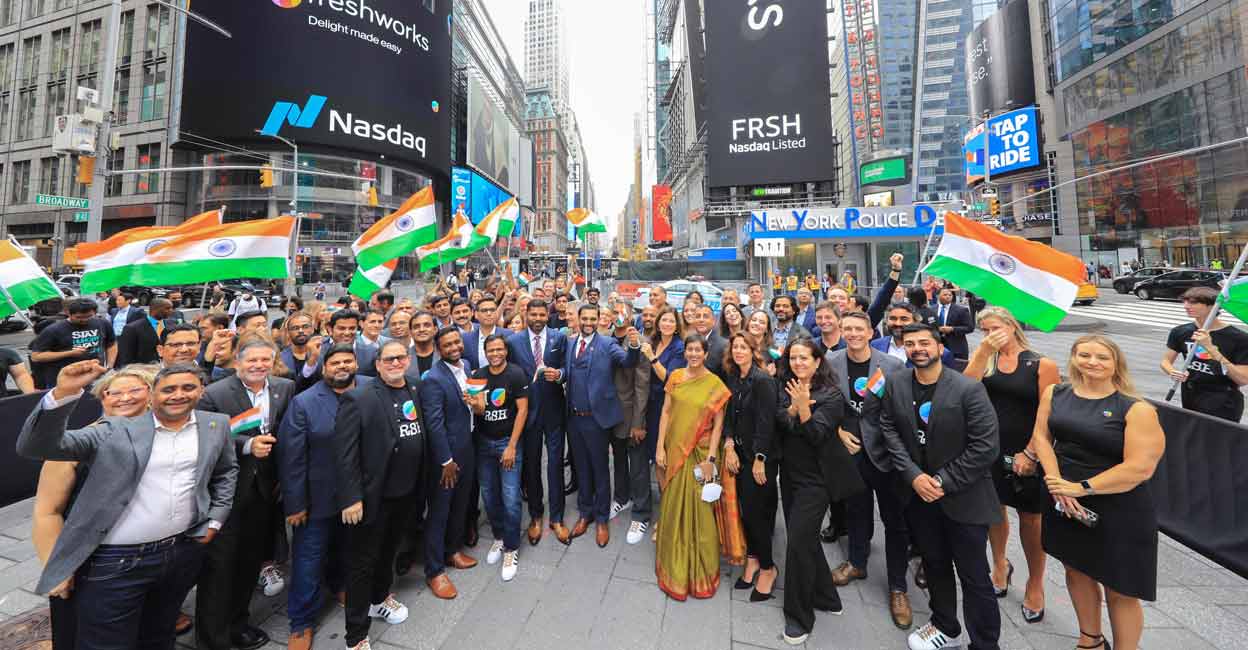 Chennai: A struggling young entrepreneur from Chennai once told his wife that he was working hard not merely to buy a BMW car for himself, but also to enable all his employees to buy such a car. The dedication and hard work put in by Girish Mathrubootham as CEO finally paid off. When his company Freshworks was listed in the New York-based Nasdaq stock exchange last week, around 500 of his employees, who are shareholders in the company, became crorepatis overnight. Interestingly, about 70 among them are only below 30 years of age.

Remember, Freshworks, launched in 2010, is one of the biggest software-as-a-service (SaaS) companies in India. From a software service firm with Rs 300 crore turnover, his empire now has grown to achieve a total valuation of Rs 1,300 crore. Multinational companies like Thoshiba and Honda are all lining up in the queue for the services of the firm that stands out in the software industry. The 46-year-old has shown the entire world how a firm from India could work wonders in a short span of 10 years.

Mathrubootham had a whole lot of struggle in his early life. In childhood itself, his father and mother got separated. He was left with the sole option of shouldering all the responsibilities in life single-handedly. But it was a good training ground for him as he had left to fend for himself. Whether it was right or wrong – that was only his concern. But he feels now that wrong decisions helped him to learn several lessons.

Mathrubootham, who did not perform well in the 12th Class, had faced a lot of ridicule from his relatives. He did not feel angry at those who told him once that he is good enough to be a rickshaw-puller. He believed that he had to use criticism against him as a motivation to work harder and perform better. But that criticism ignited a desire in him to make it big in life. When his friends were confined to the comforts of huge pay packets and perks, Girish went by what his heart was longing for. That was why he resigned his secured job in the US, came back to Chennai and launched his startup.


A ace cinema enthusiast, Girish was so fond of the following punch dialogue uttered by Farhan, the character played by actor Madhavan in the Hindi movie ‘Three Idiots’: “I don’t have enough money in my hands. But what is the problem? I will find happiness in being a wildlife photographer.”

Maybe it is a coincidence. Mathrubootham is of the same character in real life. He never went after money. He chased his passions and finally tasted success.

The experience he had gained during his stint in Shiv Nadar-led HCL Technologies and Sridhar Vembu’s Zoho Corporation helped him a lot when he became an entrepreneur. In Zoho, Girish joined as a Java programmer. But when he left the company in 2010, he was the Vice-President of the Product Management Department. His boss in Zoho found out that he had the skills to become a product manager. When Girish was informed of the posting, the first thing he did was to search Google for what is product management. But soon, he became an efficient product manager by his hard work and efficiency.

The story behind his unparalleled success is very interesting. At the time of leaving the US, he sent back all his household items to Chennai. His 40-inch Samsung TV was found broken into pieces when it reached his Chennai home. There was insurance coverage for it. But, his claim was not entertained by the insurance firm even though he submitted all the documents. He made a flurry of emails and phone calls to the insurance company, but it all ended up in vain. Then he entered the online platform from where he came to know about the insurance firm and posted the picture of broken TV, his request for insurance and the company’s response. In a matter of a few days, an embarrassed-looking insurance company president came to his house and tendered an apology. The insurance amount was also transferred to his account. There, Girish sensed a business opportunity. The idea of consumers becoming kings in the modern marketing scenario clicked him.

He launched Freshdesk, a helpdesk. Later, the company became Freshworks though the product is still known as Freshdesk. He set up the company along with his friend Shan Krishnaswamy.

Mathrubhootham’s love for both cinema and sports know no bounds. When his firm was listed on Nasdaq, his first reaction was that he felt like an athlete who won a gold medal in the Olympics. He launched ‘FC Chennai’ to promote football. He set up the Trichy Sports League for cricket. For children, he started a residential academy.

A big fan of actor Rajinikant, he does not consider himself as a superstar in the business field. According to him, it is teamwork that matters in entrepreneurship, and he is sure that one-upmanship as CEO will not bring success. This vision has helped him to make his employees shareholders in the company, resulting in the creation of 500 crorepatis from among the commonman.