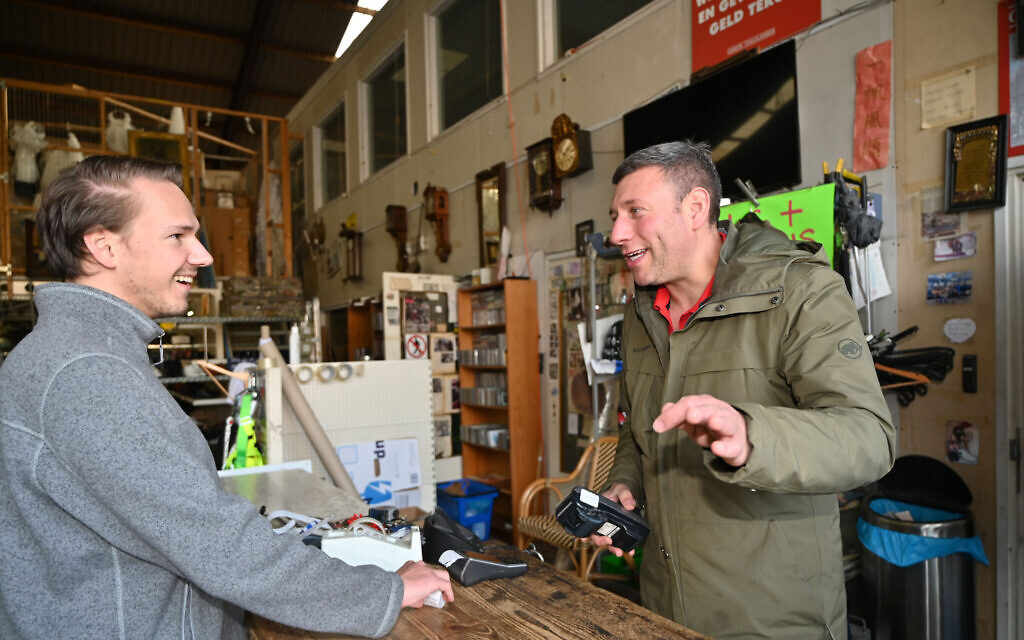 AMSTERDAM (JTA) — This city’s fabled Jewish market, which opened in 1893 on Waterloo Square, came to a tragic end in the Holocaust, when the Nazis and their collaborators murdered nearly all the local Jews.

But the spirit of Waterloo Square, and the Jewish peddlers who once bought and sold odd lots in many cities, can still be found elsewhere in Amsterdam — if you know where to look.

Today, it dwells inside a tennis court-sized warehouse owned by a 41-year-old Jewish businessman named Gideon Italiaander, who started a successful chain of Dutch thrift stores. A high school dropout from a family traumatized by the Holocaust, Italiaander heads one of the Dutch capital’s most popular home design shops, which thrived during the COVID-19 pandemic largely because of donations by its loyal customer base.

At the warehouse on Haven Street, near where many of Amsterdam’s Jews currently live, a heavily Jewish clientele mingles with other low-budget shoppers for an experience in which business often takes a backseat to the pleasure of social interaction.

At Gideon Italiaander’s, shoppers browse a randomly assembled stock that includes rare antique lamps scarred by time, a pile of brand-new children’s fishing rods from China and clothes and books in multiple languages.

The chaotic indoor flea market opened a decade ago in the city’s southwestern edge, where Jewish life reconsolidated after its near-destruction in Amsterdam’s more central former Jewish quarter. Italiaander has since opened four additional locations across the city. While only the Haven Street one sells used products, the chain as a whole is a favorite for low-budget home design customers.

Shoppers browse through the products on sale at the warehouse store of Gideon Italiaander in Amsterdam, the Netherlands, on October 11, 2021. (Cnaan Liphshiz/JTA)

Dutch shoppers of all backgrounds visit Italiaander’s, which is currently promoting Christmas items on its social media feeds. (Its bright red trucks travel the city streets emblazoned with a picture of Italiaander’s face and the tagline: “GIDEON: If you don’t know us you’re not from Amsterdam.”)

But Jews make up a significant portion of the Haven Street clientele — “This place sometimes looks like the Jewish nursing home,” Italiaander told the Jewish Telegraphic Agency — and the owner’s background is palpable throughout.

Over the cash register, Italiaander, who is not religiously observant, prominently placed an ornate frame displaying Birkat HaBayit — a Hebrew-language text whose name means “a blessing of the house.”

It’s a reference to Italiaander’s Jewish identity, which he says has something to do with his choice of work.

“It’s such a strong mercantile intuition that I think it has something to do with my origins,” said Italiaander. 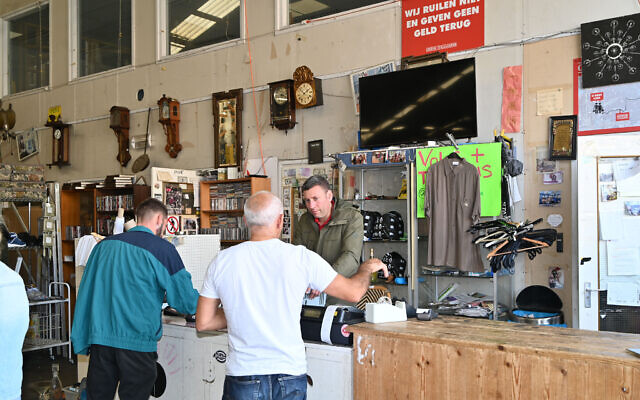 Gideon Italiaander listens to a customer at his shop in Amsterdam, the Netherlands, on October 11, 2021. (Cnaan Liphshiz/JTA)

Judaism is “something important to me,” Italiaander, who is not married and has no children, told JTA. “I’m a sponsor of Chabad in Flevoland [one of the Netherlands’ 12 provinces] and I have trouble saying no to people from Jewish groups who ask me for a donation, but I don’t go to synagogue or pray very often.”

In his immediate family, Italiaander is the only tradesman. Like many Dutch-Jewish families traumatized by the Holocaust — Italiaander said some of his relatives “got pretty banged up mentally” during the genocide — Italiaander’s parents encouraged their children to get a good education in professions that offer potential for mobility. But while his parents are social workers in the Jewish community and his siblings work in computing, audiovisual technology and journalism, Italiaander’s time at a prestigious high school did not have the effect his parents desired.

Italiaander said his decision not to go to university “disappointed” his parents. “But studying texts is not for me,” he said. “I forget the beginning of the sentence by the time I reach the end.”

This limitation led to a series of what he describes as “awful jobs.” One of them, in 1998, was unloading boxes for an antique vendor at Amsterdam’s Northern Market.

“I saw him do business, and I knew this is what I wanted to do,” Italiaander said. “What I like is the interaction with the clients, not the colleagues so much. Market vendors don’t tend to be the most pleasant company, frankly.”

One of his customers, Esther Voet, the editor-in-chief of the Dutch-Jewish NIW weekly, said Italiaander’s lack of a formal education makes him “an even more remarkable success story, for which I have a lot of respect.”

The uniqueness of Italiaander’s chain of shops lies in how “it allows people with a bit of creativity to find very original additions for very affordable prices in one place. Which, personally, just makes me happy,” said Voet, who lives in a canal-view apartment in Amsterdam’s hip Jordaan neighborhood.

Italiaander’s informal yet polite style, as well as his rich vocabulary and articulate speech, set him apart from many other street vendors in Dutch markets, where he began selling second-hand items in the 1990s. Many of his clients feel welcome to hang around without buying anything.

“I come sometimes but I don’t buy anything here because, frankly, this place is full of stuff that I either don’t need or can’t afford,” said Tali Schipper, a 77-year-old retired jeweler who has known Italiaander for many years and sometimes joins him behind the seller’s counter. 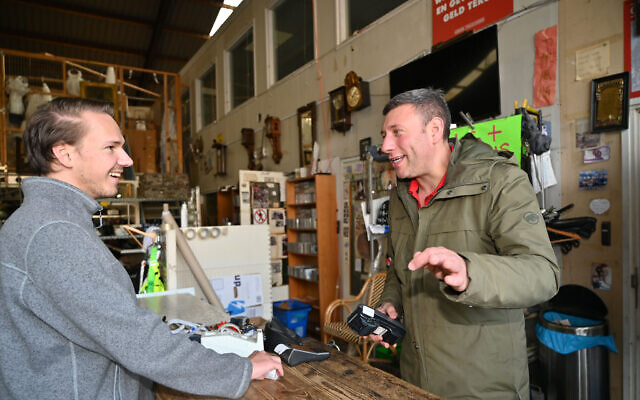 Gideon Italiaander (right) charges a customer’s debit card at his shop in Amsterdam, the Netherlands, on October 11, 2021. (Cnaan Liphshiz/JTA)

In the early days, Italiaander was working 16 hours every day of the week, according to a former colleague. When they weren’t at the market, he and his partner Rob Mevius drove across the country searching for items to sell, at first in a van Italiaander’s parents helped him buy and later in a fleet of trucks acquired to support the growing business.

COVID-19 threatened to undo everything that Italiaander had built.

“During three months of lockdown, we couldn’t sell anything,” Italiaander said. Because he sells second-hand goods, his clients want to examine products before buying them, and “they’re not going to order them online,” Italiaander said. “Expenses were piling up. Income had ceased.”

Instead of downsizing as many businesses have done, Italiaander proceeded to make a big bet.

“I decided to keep on buying product,” he said. “A lot of businesses were going under and COVID was a chance to get fantastic merchandise cheap.”

But it was a gamble because no one knew how long the lockdown would go on. “I was scared,” Italiaander said. “My main takeaway from the experience is not to go anywhere near a casino.” 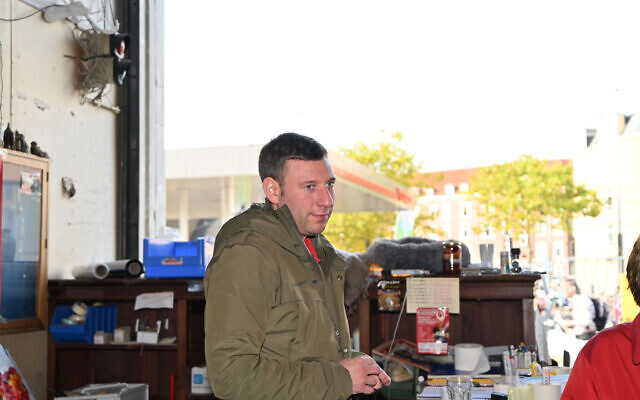 Gideon Italiaander listens to a customer at his shop in Amsterdam, the Netherlands, on October 11, 2021. (Cnaan Liphshiz/JTA)

During the lockdown, Italiaander appealed to his clientele to help him pay the salaries of his chain’s 40-odd employees through a deal that he advertised on Facebook: Clients who would give him cash during the lockdown would have it doubled in store credit when the shops reopen.

“It was a vote of confidence. It generated $120,000 in days, and that kept us afloat,” Italiaander said.

Asked why he, a millionaire, spends most of his days haggling over pennies inside a warehouse, Italiaander gave a two-pronged reply.

“Part of it is about constantly taking the business’ pulse and being available for sellers,” he said. “Another part of it is that I’d die of unhappiness if I had to work at an office away from people.”