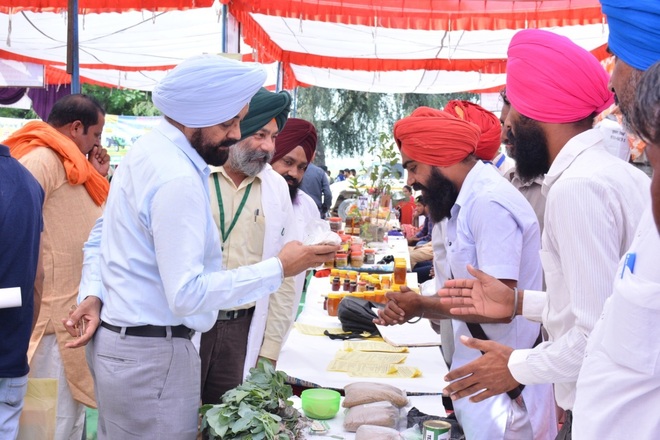 It may sound strange but the excitement and eagerness to go to fairs helped him establish his own business.

Most of the fairs in the state are related to entertainment or religious beliefs but fairs held by Punjab Agricultural University (PAU) not only entertain but also spread information about new agricultural techniques, improved seeds and aware the farmers of ongoing research activities.

Manjit Singh is one of those farmers who got inspired after his visits to PAU farmer fairs and his life changed forever after that. Getting inspiration from stalls at kisan melas, Manjit is now a successful entrepreneur and owns a nursery.

“I always had attraction for fairs since my childhood days. My family’s main occupation was agriculture and I still remember it was in 1998 when I first visited a kisan mela. Our elders used to grow traditional crops to which he was averse. Stalls and exhibitions at farmer fairs kept inspiring him to do something new. By seeing others displaying their works on fair stalls, I set my goal to be one of the leading agri entrepreneurs in coming years,” Manjit said.

After thorough discussions with scientists and other farmers during farmer fairs, he decided to set up a nursery venture in 2012-13. Initially, he started growing bell pepper nursery on 0.5 marla in 2012-13. His only intention at that time was to learn. Later, he expanded his area under the nursery to 1,000 sq m and with the help of PAU scientists, he fulfilled his dream of setting up his stall in the farmer fair in 2018.

He earned a handsome profit of Rs 1 lakh from an area of 1,000 sq m only from his nursery venture in his first attempt. He started using his savings for further development of his farm. The KVK, Mansa, provided him with a vermi-compost unit to promote organic farming and reduce the cost of cultivation.

“I also installed walking tunnel at my farm where I grow nursery of tomatoes, peppers and pumpkins in pro-tray nursery and mastered the art. My income increased by Rs 80,000 with the adoption of this technology. In addition to increasing the area under the vegetable nursery, now, I am also growing the nursery of paddy and kharif onion, besides expanding the area under Rabi onion as seed crop,” Manjit said.

Inspired by his success in nursery raising, four young farmers from his village have taken up vegetable and nursery cultivation, contributing to diversification.

“Farmers’ fairs have brought laurels to me. I wish that the Covid-19 situation improves soon so that farmers may take the advantage of farmer fairs like in the past. Farmer fairs are not only educative but also entertaining and we tend to enjoy delicacies from across states,” he said.

Inspires young farmers from his village

Inspired by the success of farmer Manjit Singh in nursery raising, four young farmers from his village have taken up vegetable and nursery cultivation, contributing to diversification.