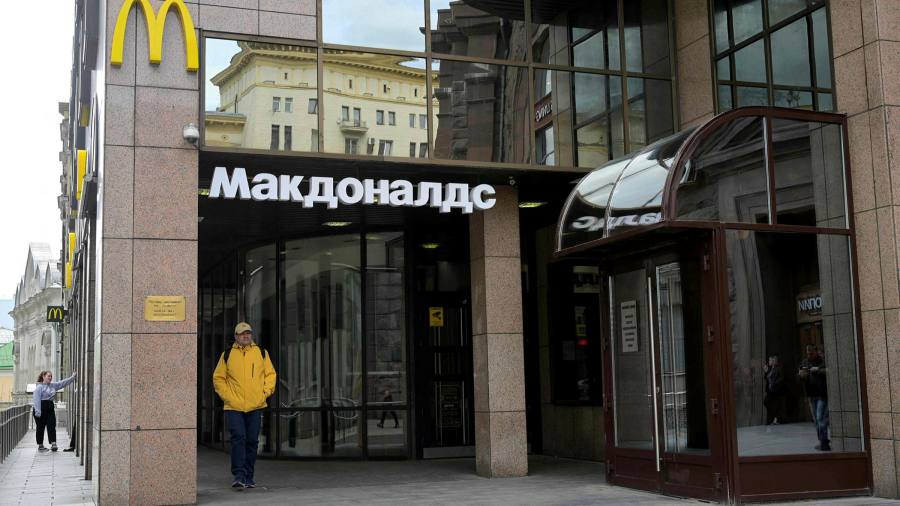 McDonald’s has agreed to sell its Russian business to Alexander Govor, a local franchisee who operates 25 of the chain’s restaurants in Siberia.

Under the terms of the deal announced on Thursday, Govor will take over the group’s entire Russian portfolio of about 850 restaurants, operate them under a new brand and offer a different menu.

McDonald’s did not disclose a price for the sale, which the chain said remained “subject to certain conditions, including regulatory approval, with closing expected to occur in the coming weeks”.

Govor, a little-known businessman from Novokuznetsk, a metals and coal-producing town in west Siberia, managed McDonald’s restaurants across west and east Siberia through his company GiD, according to multiple Russian media reports.

After making his fortune in the coal business in the 2000s, Govor then diversified into food and agriculture, the reports say. He founded Sibirskaya Milyona, a food producer which owns several cattle farms, milk plants, a sausage factory and a restaurant.

He co-owns a construction business and oil refinery owner called NefteKhimService and funded a museum which displays his collection of classic cars.

The businessman will also take over McDonald’s liabilities to landlords and suppliers, as well as pay the salaries of local staff, who have been unable to work since the chain closed its operations in March following Russia’s invasion of Ukraine.

“The decision taken is the result of a lengthy and difficult negotiation process,” Russian industry and trade minister Denis Manturov told local media. “It is important that, as a result of the agreements reached, the work of a large network of catering establishments will continue, and jobs will be preserved with a guarantee that the new owner will comply with previously accepted obligations to employees,” he said.

McDonald’s had been spending about $55mn a month on rent and wages for its 62,000 Russian staff while its operations were suspended.

The group, which relies on franchisees in most markets, owned the majority of its outlets in Russia directly, with only about 100 in the hands of franchisees such as Govor.

The Chicago-based company this week said the Ukraine invasion had made its operation in Russia “no longer tenable”, and that the departure — its first-ever exit from a large market — would result in a non-cash charge of as much as $1.4bn.

McDonald’s has operated in Russia for more than three decades, with its launch in Moscow in January 1990 resulting in more than 30,000 people queueing up to buy a burger.

The company declined to comment beyond its statement, which made no mention of what proceeds it might expect from the deal or whether it would be structured in a way to allow it to repurchase the Russian restaurants in future.

Several advisers to western companies have been studying the exit agreement struck by Renault, the French car company, which sold its Russian operation to a state-backed group and the City of Moscow for just Rbs2 ($0.03), but secured an option to buy the business back in six years.

Michael Joblove, a US litigator who is advising western franchisers on their options in Russia said McDonald’s was unusual among fast-food groups in having owned most of its outlets there.

Most other franchisers were still “treading water”, he said, caught between their pessimism about the outlook for Russia and the difficulty of enforcing their trademark rights in Russian courts should they terminate franchise agreements.

If local operators veered from agreed standards, “there’s no real lever of enforcement as things stand now,” he said.