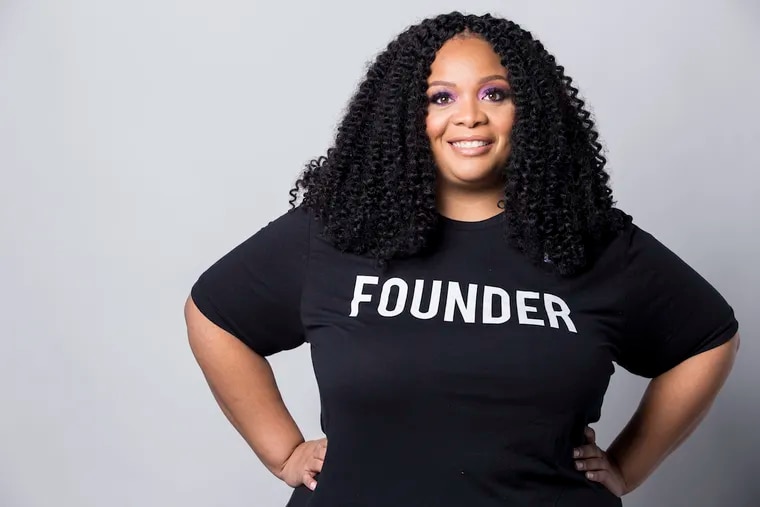 Kimberly Wilson, a Black woman who struggled to get white doctors to take her symptoms seriously after a 2017 fibroids diagnosis, founded digital start-up HUED a year later to enable Black and Latino patients to find culturally sensitive medical care.

Wilson is a model for what many in the region hope to encourage: a Black female entrepreneur who’s raised venture capital in Philadelphia to build a business.

Up until the killing of George Floyd and ensuing protests, Black, Indigenous, and people of color (BIPOC) founders and entrepreneurs started businesses at a high rate but were often starved for capital. Amid the heightened focus on social equity issues, nearly a dozen new investment funds have launched in the Philadelphia region, aspiring to raise at least $300 million or more for BIPOC business owners.

Some of the new funds focus heavily on real estate, while others nurture tech start-ups.

One flagship project: Mosaic Development Partners, an African-American-led developer for the Philadelphia Navy Yard’s next phase, is building a $2.6 billion, multiyear development. Just breaking ground, the Navy Yard effort has promised to subcontract $1 billion worth of work to companies run by people of color.

So will the promise of this moment turn into a movement? Or will it fizzle and revert to the mean?

There’s an uptick in interest, say a wide range of entrepreneurs and funders. But there’s still a lot of catching up to do and a lot of Philly skepticism to overcome.

“Until we get more women and people of color writing checks, I’m not sure,” said Tanya Morris, founder of MomYourBusiness, an accelerator for women of color.

“We funded HUED because the problem the company is attempting to solve is massive and one that was laid bare during the pandemic, “ said Osage partner Emily Foote.

“I’m a founder of color, and I can say that this year, there are a lot of investment funds focused on BIPOC founders. We’re nowhere near equality, to the point where it should be, but there’s definitely more capital being put to work by VC firms into BIPOC owners,” said Marable. His analytics company raised $1 million in its latest round.

Other BIPOC entrepreneurs have a similar take. “If you look at recent data around who gets funding, the truth is we still have a long way to go to level the playing field for BIPOC founders,” said Yong Kim, founder of Wonolo, a staffing platform that matches jobs and employers. He recently moved his family from Silicon Valley to Philadelphia.

“I am proud to have a diverse set of investors who are mission-driven and who are eager to support me as an Asian American and immigrant founder,” said Kim, whose Philadelphia customers include Nordstrom. “That gives me hope that investors overall are expanding their thinking around who should get capital.”

A key study this year examined barriers to capital: the Philadelphia Equitable Entrepreneurship Ecosystem Assessment and Strategy, issued in May, found that BIPOC communities have higher rates of start-ups compared to white entrepreneurs, but far more frequently lack capital.

BIPOC founders often lack a network of family and friends for capital or credit lines with banks. So many take on debt instead.

“The main barrier to capital for minority enterprises is their balance sheets — little cash and receivables — along with low assets” to qualify for loans, said Della Clark, executive director of the Enterprise Center. “Most already have [too much] debt.”

Similar trends hold in real estate. So Black and brown developers started The Collective, a group of seven African American developers aiming to raise their own $100 million investment fund by year-end, tapping banks and private real estate investors. The developers include Tayyib Smith of Smith & Roller and Leslie Smallwood-Lewis of Mosaic Partners.

“At a national level, what The Collective’s doing is unique,” because it’s all African American developers working together, said Karine Blanc, the group’s Director of Investments. She says Philly has historically been similar to Newark, N.J., where “there are opportunities for developers of color, but very little capital for their projects.”

Groups like ImpactPHL are also in demand for introducing prospective investors and entrepreneurs, said its executive director Cory Donovan. While they don’t yet have solid data on deals, “this summer has been an explosion of funds looking to put money to work,” Donovan said. “People want to invest locally, but they don’t have the time or expertise to make direct investments in start-ups. We help them do that.”

In Philadelphia, here are some existing players and new entrants:

“We don’t talk about BIPOC founders enough who are starting up scalable, high growth technology companies,” Mobley said, pointing to Gopuff the fast-growing delivery firm, as a local success story he would like to see replicated by BIPOC founders. In the last year, Gopuff’s valuation reached $15 billion as it expanded across Europe and to 1,000 cities in the U.S.

Ben Franklin Technology Partners Southeastern Pennsylvania has invested $6.1 million so far in its fiscal 2021. Of that, about one-third, or 31 companies, are BIPOC-led, and 42% are led by women. Its most recent diversity investment was on Jan 5, 2021, when Avisi Technologies raised $988,000. Cofounded by Rui Jing Jiangand Brandon Kao, the biotechnology start-up works on nanotech defenses against blindness.

Ben Franklin also partnered with the Philadelphia Alliance for Capital and Technologies, or PACT, and will open up its mentorship program to all BIPOC entrepreneurs, not just its members, said Jason Bannon at Ben Franklin S.E. Pennsylvania. To find a free business mentor, visit PACT’s website: https://philadelphiapact.com/mentor-connect/.

While Philadelphia is a diverse community, “our investment and emerging tech community is not,” said PACT President Dean Miller. “This partnership with Ben Franklin is an effort to change that.”

A leader among advocates for BIPOC entrepreneurs is Della Clark of the Enterprise Center, which functions as an investment fund and clearinghouse for money. Over the past 18 months, the center has made $3.7 million in loans and $500,000 in grants, as well as assisted clients with 20,000 Paycheck Protection Program applications and Pennsylvania state grants to the tune of $2.98 million.

Clark’s next major initiative is the $50 million Innovate Capital Growth Fund, an equity fund still in early days. Clark has raised $16 million, and is seeking a total of $25 million in an initial round . The fund aims to back later-stage firms. “It’s not a venture fund. They tend to do early-stage tech. This is for later stage enterprises,” Clark said.

Mosaic is a Philadelphia-based, commercial real estate, development firm founded by Gregory Reaves, who has 30 years experience in pharmaceutical and real estate firms, and Leslie Smallwood-Lewis, a Villanova-trained lawyer who has worked for the Goldenberg Group. Mosaic redevelops commercial properties in underserved urban communities and has already done $70 million worth of projects in Philadelphia and other Mid-Atlantic cities.

Among the newest is the Sharswood Partners joint venture between Mosaic and Shift Capital, two developers assisting the Philadelphia Housing Authority in the redevelopment of the Ridge Avenue commercial corridor.

Sharswood “included a crowdfunding element in their project, so regular people can invest as little as $100” via a site called SmallChange.co. That effort has already raised $750,000 from individuals to co-invest in the project.

Mosaic had another recent win: As co-lead developers for the Navy Yard project, it has promised to subcontract $1 billion worth of work to minorities while also pledging to employ a 35% diverse construction workforce with half of the workers coming from the Philadelphia region.

“It will be incredibly inclusive at all levels,” said Reaves, co-owner of Mosaic, based in the Strawberry Mansion section of North Philadelphia. Mosaic is developing the site with Ensemble Real Estate Investments of Long Beach, Calif.

During COVID, Black women and women of color lost jobs faster than their white counterparts and are experiencing an uneven economic recovery.

“There’s this weird narrative of people not wanting to work,” said Kelly Sheard, director of the Gender Wealth Institute for Women’s Way.

“But black women always have had the highest participation rate in the labor force and starting businesses at higher rates. We’ve always worked! It’s just that now, women are saying ‘I’m no longer willing to work for poverty wages in unsafe environments with no pathway to abundance.’ They are chafing at that.”