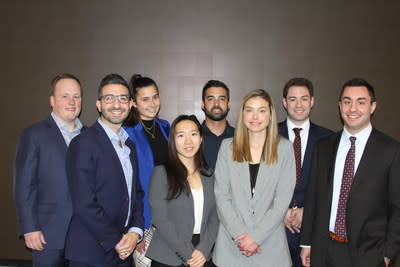 Andrew Strafaci, who completed a dual MBA and law degree at Rutgers in 2020, created the Cyndrom name and logo while he was an undergrad studying civil engineering at College of New Jersey. The company now generates about $20,000 in annual revenue, fueled by sales of its “Ride On” line of hats, hoodies, and beanies popular among skateboarders, snowboarders, and cyclists across the country.

The brothers were one of five teams that competed at Rutgers Business School on April 22 for some of the $50,000 prize money provided by the Sales Executive Club of Northern New Jersey Foundation.

Citing the close competition, the judge opted to spread the prize money among all the participants, awarding a $15,000 second prize to MBA students Jason Miller and Matthew McQueeny, co-founders of Big League Pillows; and $10,000 to a team of Rutgers undergraduates, including Anna Zhang and Iris Zhorov, who are building the Smart MS3 device to help patients improve the effectiveness of their physical therapy.

The judges awarded $2,500 to Rutgers MBA student Kathryn Ruhno, whose early-stage start-up Raw Paw Life sells dog food and treats; and another $2,500 to Andrew Zambrowski, an alumnus of the Rutgers Business School undergraduate program who pitched for Monkey Business. The company offers small businesses an app to help them compete more effectively against established brands.

Each of the teams made short pitches, describing their nascent companies, highlights of their strategy and the company’s performance, and projections for future growth.

The Sales Executive Club of Northern New Jersey Foundation sponsors the business plan competition annually as a way of encouraging the entrepreneurial ambitions of Rutgers Business School students and alumni. The competition is also one of the facets of a broad ecosystem at Rutgers that fuels its strength in entrepreneurship.

Over the past 20 years, Richard Romano, president of the foundation and a member of Rutgers Business School’s board of advisors, has helped make more than $1 million in funding available to student and alumni founders.

“The business plan competition is significant in a couple of ways,” said Professor Doug Brownstone, who organizes the competition. “Student entrepreneurs are able to win money to get their businesses accelerated and the top five teams also get mentoring.”

“These are full-time students or alumni who have jobs, and they are also working on starting up businesses so it’s extremely valuable,” he said.

Like previous winners, Andrew Strafaci intends to use the prize money to grow his company.

Strafaci, who grew up skateboarding along the Jersey Shore, said the funding from the competition will allow him and his brother to expand Cyndrom from a casual clothing line to an active wear brand that offers more technical sports gear like rash guards for surfers and gloves for snowboarders.

“The money will be a catalyst for growing Cyndrom,” Strafaci said. “The money also says Rutgers believes in me. Having that support is important because it’s such a great school.”

Cyndrom currently sells its products in a Belmar surf shop and a Redbank skate shop, and it also makes sales from its website and pop-up stores at the Jersey Shore. In addition to increasing its selection of apparel, Stafaci said he plans to use the prize money to increase marketing. His goal is to increase sales to $1 million by 2025.

Mayuresh Pandit, a Rutgers MBA alumnus and senior product manager at Amazon, assisted Professor Brownstone in mentoring the students. He also helped to judge the teams.