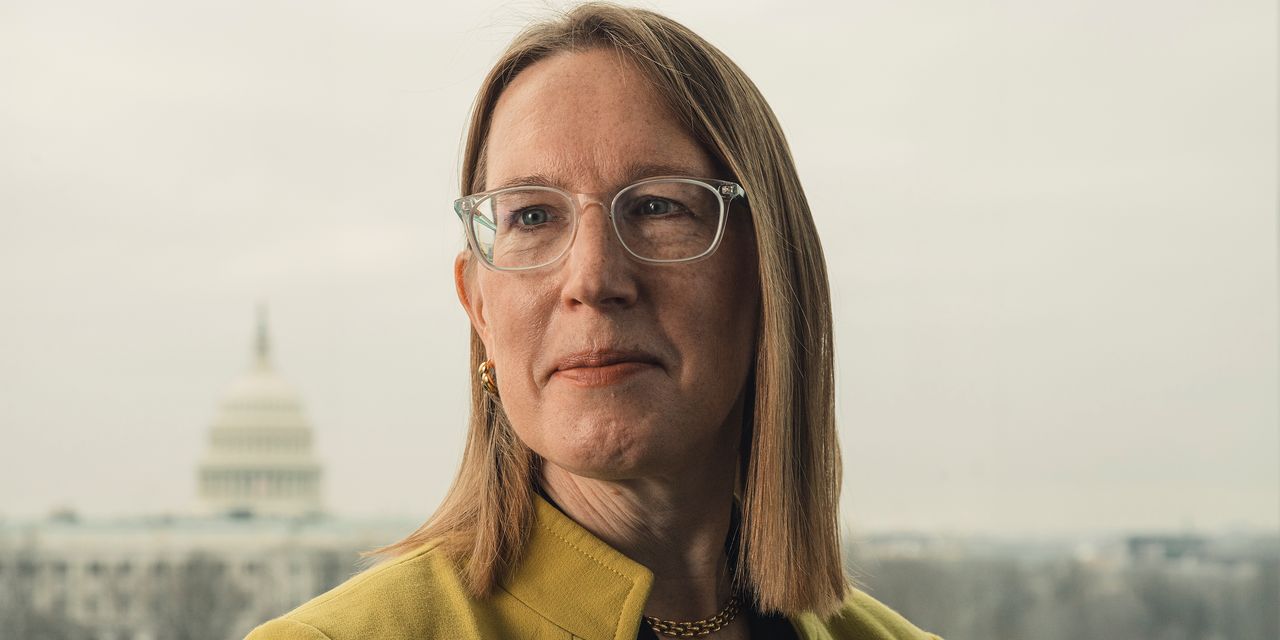 Crypto has turned contentious in Washington. While the White House pushes for new rules, a partisan divide is growing in Congress over how to supervise, tax, and regulate the industry. At the nexus of the debate sits the Securities and Exchange Commission.

Led by Chairman Gary Gensler, a Democrat appointed by President Joe Biden, the SEC has taken a get-tough approach to the industry. But Gensler also faces opposition within the agency—notably from fellow commissioner Hester Peirce.

A Republican appointed by former President Donald Trump, Peirce has won the nickname “crypto mom” for her outspoken and unwavering support of the industry. She has clashed with Gensler over crypto enforcement actions, called for a light regulatory approach, and urged the agency to approve an exchange-traded fund based on spot prices for


Bitcoin,
in addition to the recently approved futures-based products.

Barron’s spoke with Peirce about what’s next for crypto regulation and how she’d like to see Washington handle the industry. An edited version of our discussion follows.

Barron’s: What makes crypto buying and selling so challenging to regulate?

Hester Peirce: There isn’t clarity around who—if anyone—should be regulating crypto exchanges. There’s nothing in the rule-making agenda that says we’re going to create a registration regime for crypto exchanges. It would be quite difficult for most of the platforms to register under the existing framework, partly because they do things differently than traditional securities exchanges.

How are crypto exchanges different from stock or commodity exchanges?

Among other things, they have retail accounts—they’re custodying crypto for retail clients. That’s very unusual; usually a broker/dealer is the intermediary. And some of the tokens on exchanges may be securities, but presumably not all of them are. So, can you trade a security alongside a nonsecurity? We don’t have examples of that in the traditional exchange world.

If we are going to have a regulator, in my ideal framework it would be a self-regulatory organization—an example being Finra [the Financial Industry Regulatory Authority, which oversees brokerages and exchanges]. Or the market could pressure exchanges to explain how they’re operating and force more disclosures.

But I think a lot of people are going to want a [governmental] regulator. If that’s the case, the SEC is one potential regulator. We can craft a regime that could work for crypto venues. I’d like it to be done in a transparent, collaborative fashion. And it would be more comfortable to do so with a statutory mandate.

It seems like one roadblock for exchanges is that some tokens, as you say, might qualify as securities, while others wouldn’t.

At some point, someone’s going to have to start identifying which of these things are actually securities, which we haven’t been willing to do. If we’re requiring some distinct treatment for the securities and the nonsecurities, it’s going to be really difficult for exchanges to register.

Even if an initial coin offering is determined to be a securities offering, it’s not clear to me that the token itself is the security. For example, something is sold with promises that make it a security, but over time it loses those features. We have not historically put out lists of what we think is a security and what isn’t. That would be a very unusual thing for us to do. I don’t know how we’re going to get clarity. We’ve got to have a mechanism other than enforcement actions to provide some clarity.

That brings us to Bitcoin ETFs. Fund companies have tried for years to persuade the SEC to approve a spot-based Bitcoin ETF, which would own the coin itself, much the way gold ETFs work. Those products exist in Canada and Switzerland, but the SEC has approved only futures-based Bitcoin ETFs. What’s the holdup?

One reason for the denials is that the Bitcoin spot market isn’t supervised and could be manipulated. That reasoning is problematic. We’re treating crypto differently than we’ve treated other types of products that I would argue are similar. The notion that the underlying market has to trade just like a regulated securities market seems very extreme to me.

Proving that the Bitcoin spot market is treated like other regulated markets seems unnecessary to show that there wouldn’t be a problem in trading. Look at a lot of markets, like for commodities—they may not be as neat and organized as our regulated markets. And even in our regulated markets, sometimes there are problems. But that doesn’t cause exchange-traded products built on those markets to have problems. I certainly think we’ve had opportunities to approve an ETF that we should have taken.

Is there any shift in the SEC’s thinking on Bitcoin ETFs?

Based upon the recent application denials, I have trouble understanding how that could be the case. People can buy Bitcoin directly. But a lot of people want to hold Bitcoin in the same accounts as other parts of their portfolio; Bitcoin ETFs would be very convenient. I wrote my first dissent over the denial of a Bitcoin ETF four years ago, and I’m still amazed that there hasn’t been an approval yet.

You’ve written proposals for cryptocurrency issuers to have a “safe harbor” from regulatory actions, giving them time to build decentralized blockchain networks and apps. Where does that stand?

It has made its way into a piece of legislation introduced by Rep. Patrick McHenry [R., N.C.]. But I haven’t convinced my colleagues on that one, either. A lot of the reaction is, “The rules are the rules. People need to figure out how to comply with them, and they can come in and talk to us.” The problem is that you never see a workable solution coming out of that process. And that’s what I’m urging the Commission to do—come up with solutions that achieve investor-protection goals and allow some of these things to move forward.

Let’s move on to decentralized finance, or DeFi. Gensler has called it the Wild West of crypto. These are blockchain networks, tokens, and apps that are being used for trading, lending, and borrowing. None of it is under any regulatory oversight. Is DeFi really decentralized? Should it, in some cases, be supervised?

DeFi poses a challenge. If protocols are truly decentralized, then we don’t have the centralized intermediaries we’re used to dealing with. There are benefits to DeFi that take away some of the need for regulation that you see in the traditional finance world. DeFi allows for great transparency, and it contributes to the resilience of the market because it spreads risk across a lot of people instead of concentrating it in particular intermediaries.

Those things are positive, but there are definitely instances in which the label is misapplied, and it really looks a lot more like traditional finance than perhaps people are willing to admit.

You have to be careful not to regulate software code, because there are First Amendment considerations around trying to stop people from coding. What I fear is that we, and other regulators, will try very hard to find someone and claim that person is the project, in instances where there is no person behind the project.

Do you like the idea of a “crypto czar”—one regulatory agency overseeing the whole industry?

I understand the attractiveness of having one entity that’s a crypto specialist because now there’s such diffuse authority, and nobody knows who’s responsible for what. At the same time, given the breadth of crypto, it’s going to be very hard for one particular agency. Whenever people call for a regulator to do XYZ and get rid of the other regulators doing it, all they get is an additional regulator.

You’ve said a lot of the world will end up using crypto for things that now aren’t done with crypto. Could you elaborate?

Crypto allows you to transfer value over the internet in ways that couldn’t happen before. It allows you to organize human activity in a way that you couldn’t before, because people can participate in making decisions and sharing the fruits of their collective labors.

I suspect that you’ll see crypto or blockchain technology in the securities industry streamlining some of the processes and fees. How exactly that will work out, I don’t know. But I suspect that it will enable efficiencies in clearing and those other back-end functions.

Some of the most vocal supporters of crypto in Congress have also traded and bought cryptos. Should Congress ban crypto ownership by lawmakers?

That is above my pay grade.