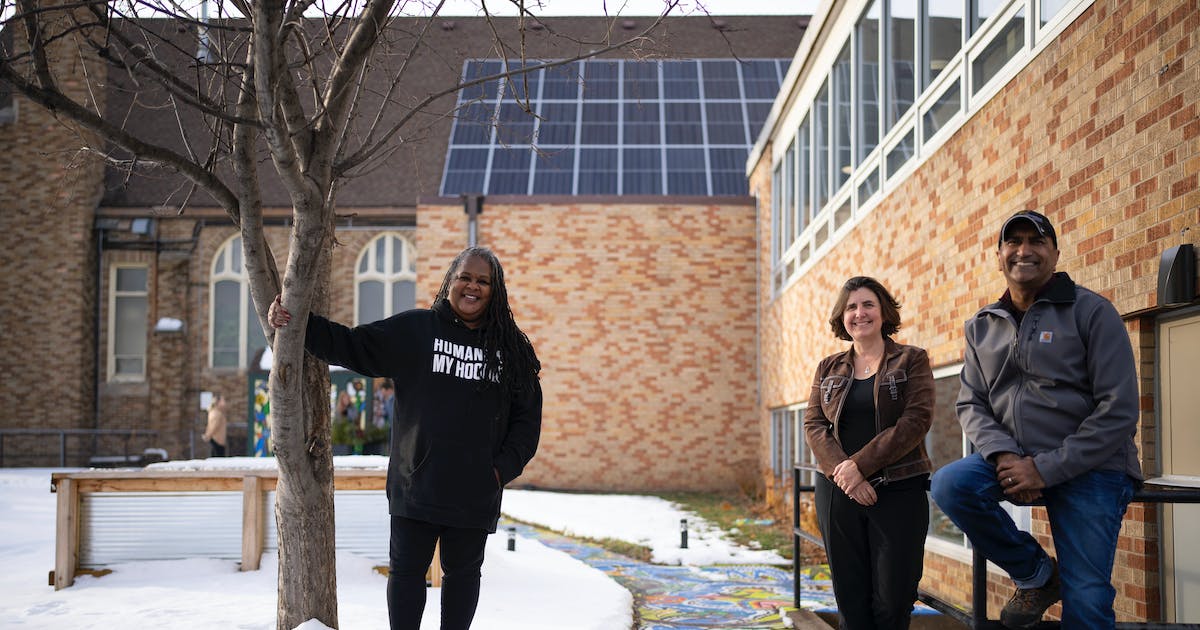 The electric bill will drop considerably for the next 25 to 30 years at Liberty Community Church in north Minneapolis, thanks to a suburban solar entrepreneur.

“It’s quite a Christmas present,” said the Rev. Alika Galloway, who added that the solar array fits Liberty’s mission as a seven-day-a-week center for spiritual and physical healing, health and wellness, technology, community gardening and youth programs.

Eventually, the two Liberty Church complexes will be able to pay their $8,400 combined electric bill pretty much thanks to solar power that they will sell to Xcel Energy. The array will generate up to 120% of their energy needs and yield extra revenue during sunny months.

Naqvi invested $450,000 in the solar installations for the Liberty churches, another church, a couple of nonprofits and a small business in the diverse, low-income Minneapolis areas hit hard by the 2020 riots that followed the police killing of George Floyd.

“My wife and I created a company, Lake Street Solar, to help enable some places that may not have the funding to do solar on their own,” Naqvi said. “We decided to do the projects through Minnesota Interfaith Power and Light and we want to be part of the rebuilding in Minneapolis.”

The transaction calls for the beneficiaries to pay back Naqvi’s Lake Street Solar, created for this and future community partnerships, less than half the installed cost of the systems.

They will not pay anything upfront and will only pay Lake Street Solar for what the solar panels produce, and at a 5% discount from what the church would normally pay to Xcel Energy for the same power.

Naqvi, as the owner, will claim related federal tax credits for up to 26% of the projects’ cost. In seven years, Naqvi will sell each system for $1 to Liberty Church and the other recipients. The beneficiaries essentially get free electricity for the lives of the solar systems.

“We are grateful for this gift and meaningful investment in our community,” said the Rev. Ralph Galloway, Alika Galloway’s husband and also a Liberty pastor. “As people of color of African descent … our cultural practices celebrate and activate sustainable practices.”

Naqvi and Kalin brought in Minnesota Interfaith Power and Light (MNIPL), which works for racial and environmental justice. MNIPL already had relationships with the Galloways and a few other solar projects on the North Side, including nearby Shiloh Temple and neighboring Masjid An-Nur Mosque in 2018.

“That paved the way for people to get excited about solar as part of the North Minneapolis landscape and helped promote energy democracy at the policy or systemic level,” said MNIPL Executive Director Julia Nerbonne.

Naqvi, 53, is a Pakistani immigrant who graduated from Minnesota State University Moorhead and worked in IT for the former Anderson Consulting and IBM before starting a consulting business with partners. He sold his shares last year to focus on solar.

Naqvi also is the founder of a solar-software firm in Eagan called Solar Informatics. In just a year of operation, it has a roster of more than 400 customers.

“We are building a construction-management software that I think will be better than what’s in the market today,” Naqvi said. “We’re only 30% to 40% done with our product roadmap. We’ve created automation and processes that once were manual.”

He’s the sole investor in the company, which now has 20 employees. He aims to double its revenue in 2022 and generate positive cash flow.

Naqvi, a soft-spoken technologist, also wants to see solar spread to lower-income neighborhoods and employ minority workers. There will be more projects.

Solar power, which generates less than 2% of Minnesota’s electricity, is expected to reach 10% by 2030, according to the Minnesota Solar Energy Industry Association. Minnesota’s overall renewable energy industry tops 60,000 workers in solar, wind, conservation software and other areas.

“I owe a lot to Minnesota and we all benefit from the great program that allows international students such as me pay in-state tuition at Minnesota State universities,” said Naqvi, who also has taught at Metropolitan State University and volunteered on economic-development initiatives.

“We want to expand solar in places where there is a lack of solar investment,” he said. “The individuals who take advantage of tax credits tend to be corporations and people with deep pockets. We wanted to work with organizations that don’t have the cash. And MNIPL already was doing this work.”