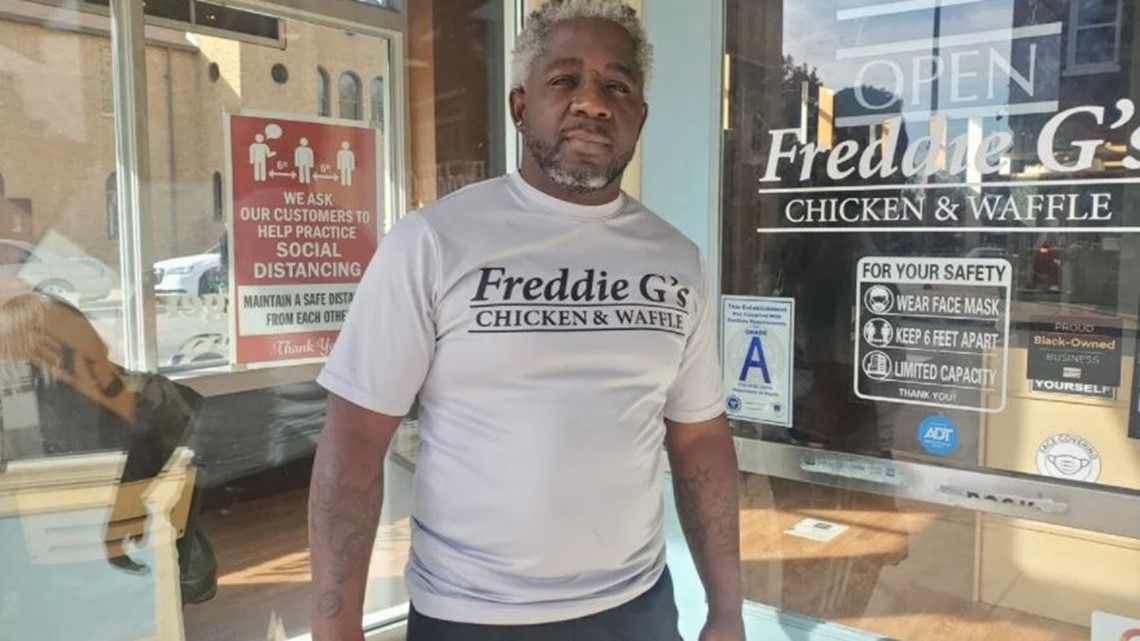 ST. LOUIS — TeByron Graham, 46, couldn’t have predicted a pandemic sweeping the globe when he decided to open a new business.

In late 2019, he signed a lease to a building at 1435 Salisbury Street, not far from downtown. He planned to open a restaurant even though the previous restaurateur had closed her shop. TeByron (who prefers to be called Byron or “TB”) wasn’t deterred. He was convinced he had a unique concept for St. Louis. The idea was inspired by a place he’d visited in 2018, “Lo-Lo’s Chicken & Waffles.”

Self-taught, Graham operated a barbershop across the street from the building he settled on after a year-long search. Without blinking, he decided to step away from the profession he’d practiced for 21 years and open “Freddie G’s Chicken and Waffles.”

He planned to open within the first months of 2020, but the pandemic derailed his plans. Thankfully, he used his savings and paid three months upfront on his lease. The landlord also worked with him until Graham was ready to open the venture in July officially. Surviving months of lockdowns and mandates, Freddie G’s opened to a consumer base that seemed anxious to escape quarantine and try something new. Today, Graham is looking to franchise the operation and add other ventures to his resume of entrepreneurial endeavors.

From a statistical standpoint, Graham is one of the lucky black business owners. According to Forbes.com, Black business ownership declined more than 40% between February and April of 2020 alone. The findings were based on a House Committee on Small Business report, which concluded that Black businesses suffered the largest drop among any ethnic group in America due to the pandemic.

Perhaps it was Graham’s upbringing that toughened him for the unexpected. He started cutting hair at the tender age of 13. Graham said he was inspired by relatives who bought land and uncles who operated their own limousine and trucking companies as a teen.

“I was always around entrepreneurs and blue-collar workers who became entrepreneurs. They just jumped into it,” he said. “I guess that’s where my fearlessness came from. Plus, I’m a firm believer in God. Instead of investing in a 9-to-5, I’ve always invested in me, and I’ve never let me down.”

Graham said he didn’t want to spend the rest of his life cutting hair. So, in 2012, he launched a line of energy drinks called “Zero2/60.”  It’s manufactured by the same company that created the formula for rapper Nelly’s non-carbonated energy drink, “Pimp Juice.” This month, Graham plans to launch new flavors for his drink, including pineapple, green apple and orange.

Graham is a divorcee with four daughters and three sons. Adhering to the “pay it forward” mantra, he said he works hard to keep his kids and other young relatives involved in his enterprises. Two of his nephews deliver his energy drinks to vendors. They also work at Freddie G’s as a waiter and manager. Next year, he plans to open an ice cream shop on Washington Avenue downtown. Although he plans to run the operation, in theory, the shop will belong to his 7-year-old daughter.

“I just expect her to be a sponge, soaking up information from me,” he said. “I want to give her a head start, so when she graduates high school, she can venture on to more and more things other than an ice cream parlor. Who knows, she might have her own Coldstone ice creamery franchise.”

Although Graham wants his businesses to inspire young, black entrepreneurs, he hopes they never limit themselves to only serving the black community.

“It’s bigger than just our neighborhood,” he said. “My goal for Freddie G’s is to franchise it. I’m looking at a spot in O’Fallon, then St. Charles, then Columbia and Cape Girardeau. Before I named the restaurant after my grandfather, Freddie Graham, I thought about naming it ‘St. Louis Chicken & Waffles.’ Then I thought, ‘Nah!’ I want this to become a Midwest restaurant franchise.”

Graham describes entrepreneurism as a 24/7 undertaking. He’s the producer of a weekly program called “Press Play Sports Talk Show” on the new AH TV Network. The show featuring former athletes he met at his barbershop previously ran on the local ABC 30 affiliate. At least 30 episodes are streaming on YouTube.

Even during an ongoing pandemic, Graham is still planning new ventures. Not satisfied with a talk show, energy drink company and a restaurant, Graham said he plans to break ground on a 5-star hotel with a garage attached and lofts on the top floors next year.

“I want to be the Joe Edwards (University City developer) of St. Louis,” he said.

He added that the new development-a block from Freddie G’s, near Highway 70, will be the perfect spot for out-of-towners who frequent the new NGA headquarters or overnight visitors of the upcoming soccer stadium downtown.

Being able to adapt to any situation quickly was the key to surviving COVID, Graham said. It’s also the main ingredient for creating your own legacy.

“We entrepreneurs have to adapt to what is ‘regular’ now as opposed to what it was two years ago,” he said. “We can’t allow the slow moments to make us think we’re failing. As an entrepreneur, you must be able to reinvent yourself and adjust to whatever is going on around us.”