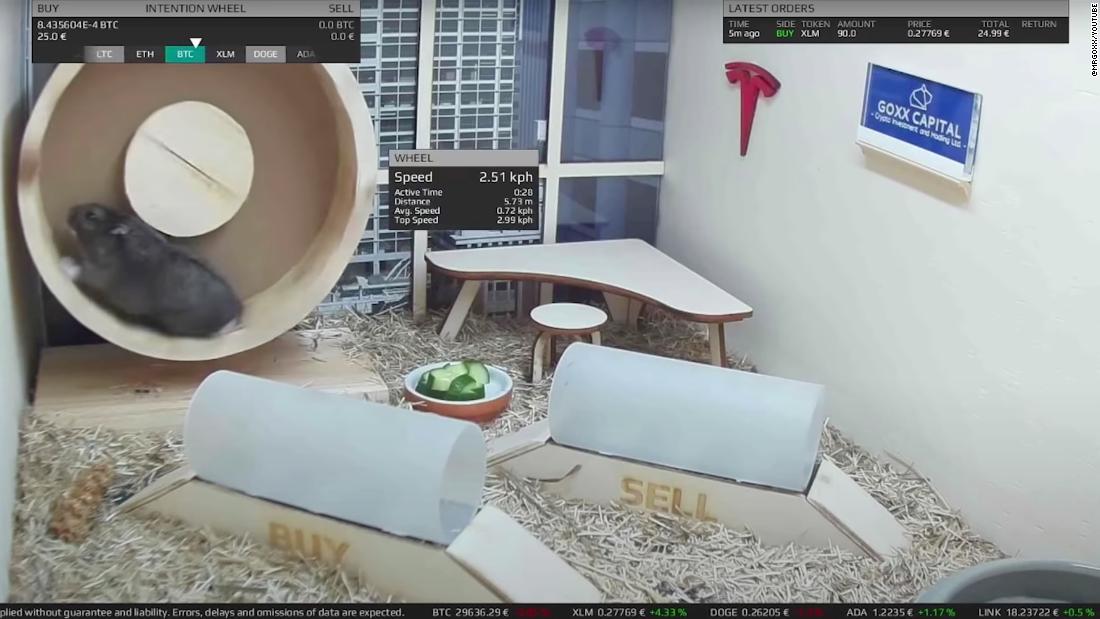 Since June, a hamster named Mr. Goxx has been running an independent portfolio that trades cryptocurrency from a high-tech cage called the Goxx Box. His portfolio has a wide range of cryptocurrencies, including TRON, Ethereum and Bitcoin.
Mr. Goxx’s trading sessions are livestreamed on Twitch. First, the hamster runs on an “intention wheel,” which spins around and chooses a cryptocurrency. Then, it scampers through either a “buy” tunnel or a “sell” tunnel, triggering purchases or sales of roughly 20 euros worth of the cryptocurrency.
Mr. Goxx’s human business partner, who presumably executes the trades, prefers to remain anonymous but posts the buy and sell orders on Twitter and Reddit. The hamster’s “office hours” and crypto updates can be followed on its Twitch and Reddit page.
In an interview with the crypto website Protos, the human behind Mr. Goxx said that the crypto picks haven’t yet been remunerative enough to pay for Mr. Goxx’s high-tech digs, which include a desk set up with computer monitors made from wood.
As of Saturday, the hamster’s performance was up more than 16% since it began trading in June, according to Protos data — an impressive feat for anyone, much less a rodent. Its returns are better than those for Bitcoin, the S&P 500 and Warren Buffett’s Berkshire Hathaway (BRKB).

Bitcoin and the S&P 500 have climbed about 14% and 5% respectively, over the same time period. Berkshire Hathaway B shares, meanwhile, have fallen by 2%. Mr. Buffett might want to invest in an intention wheel.

“Mr. Goxx is happy to see that some of his investments finally pay off,” Mr. Goxx’s human partner told Protos.

However, that’s down from a mid-September high, when Protos data showed the portfolio had risen almost 50%, to almost 500 euros. Bitcoin, the world’s most actively traded cryptocurrency, was up just 41% over the same period of time.

Financial advisers tout a broad, buy-and-hold investment strategy, arguing that even well-regarded asset-picking portfolio managers will ultimately lose to a monkey making stock picks by throwing darts at a board. Or, in this case, a hamster in a maze.

Even if Mr. Goxx continues to beat the S&P 500, investing based on a hamster’s random movements is not a sound investment strategy. The hamster’s Twitch and Reddit accounts make clear that the investments are for entertainment purposes only.