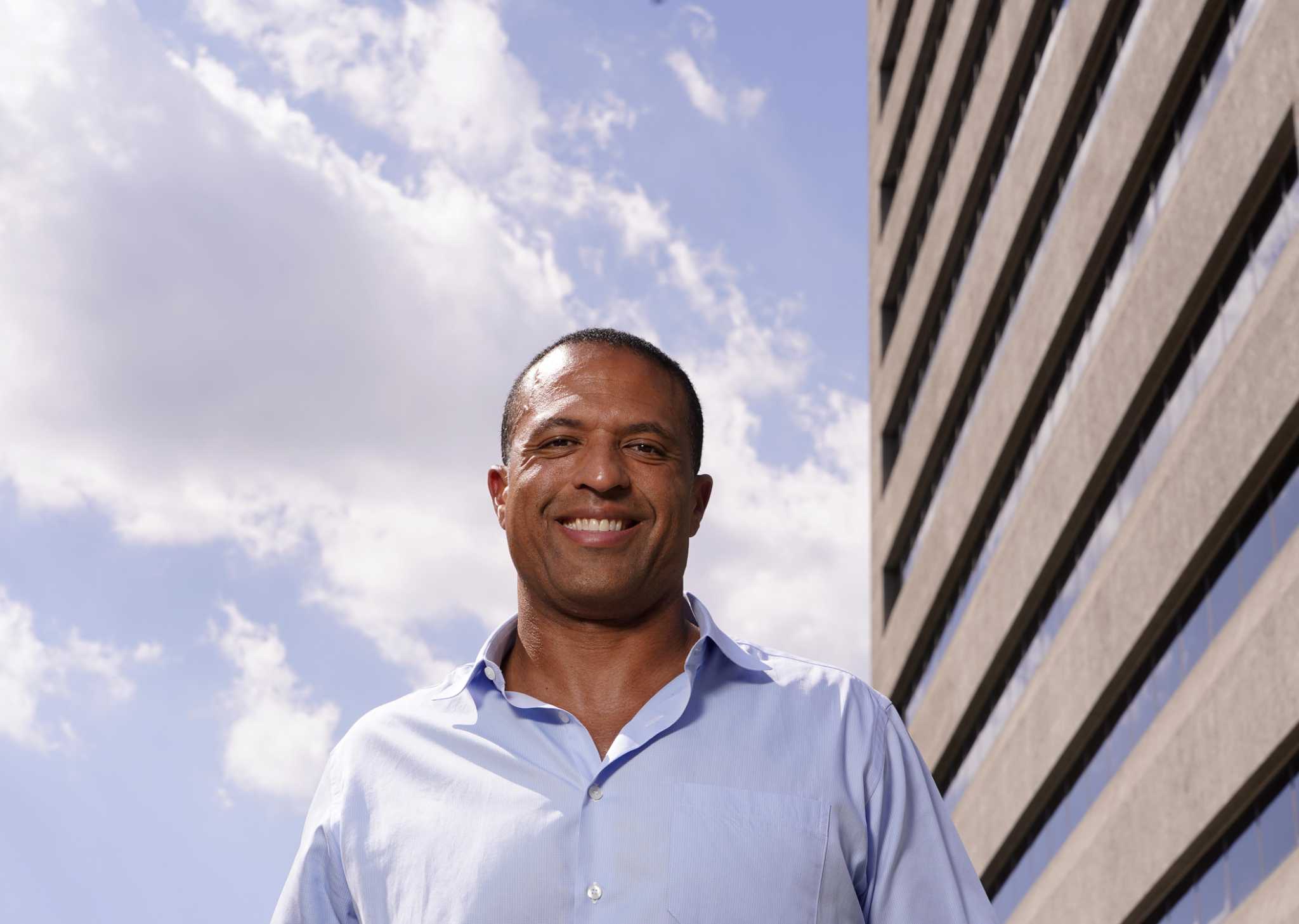 Craig Taylor grew up in disadvantaged neighborhoods near Los Angeles, the son of an African American father and a white mother who had immigrated from Germany.

“To some of the Black kids, I wasn’t Black enough, and I certainly wasn’t white,” he says.

At 8 years old, he walked home from school in tears after a white adult accosted him at a bus stop with a racial slur. In junior high, one of his friends was murdered. “They announced it in homeroom,” he recalls.

But from these rough beginnings, Taylor has thrived. Today, he’s CEO of a Houston holding company with more than 400 employees, more than 250 customers, and about $90 million in annual revenue.

Iapetus Holdings runs a fast-growing portfolio of energy and utility service companies, including a commodities brokerage, a retail energy advisory and a company that provides aerial inspection services for utility lines. Iapetus also supports a foundation that exposes Houston-area high school students with diverse backgrounds to opportunities in the energy industry and teaches them the discipline and soft skills required for success in the corporate world.

On HoustonChronicle.com: A quiet, persistent trailblazer

Taylor’s journey began in Dogtown, the once distressed neighborhood between Venice and Santa Monica, Calif. From here, he went on to a prestigious college prep school in Bloomington Hills, Mich.

He enlisted in the Navy after high school, served in the Navy’s Presidential Ceremonial Guard and oversaw a platoon of more than 50 people as a chief petty officer on the USS Ticonderoga. He earned a bachelor’s degree in management from the University of Maryland, a law degree from Fordham University and an MBA through the joint Global Executive Program at Columbia University and London Business School.

The secret of his academic and business successes may stem from his athletic endurance. He stands 6-foot-5, weighs 250 pounds, and at age 51, he trains for triathlons, including the Malibu Triathlon, which he ran in September, and the Galveston Ironman 70.3, which he hopes to run in April.

Taylor spoke with the Houston Chronicle about success and his career as a commodities broker, an attorney and an energy industry entrepreneur. This conversation has been edited for clarity.

Education: B.S. in management from the University of Maryland; J.D. from Fordham University; MBA through the Global Executive Program at Columbia University and London Business School.

Quote: “The thing that drives me the most is this feeling of what it would be like to quit.”

An internship program founded in 2013 that introduces students to the energy and finance industries. The program recruits from the Houston Independent School District. It connects students with industry leaders and teaches them how to succeed in high-pressure, performance-based environments. The program has awarded more than $450,000 in scholarships and has benefited 87 students

Q: What was it like growing up in California?

A: I was what they called a latch-key kid. I took two city buses to school by myself, beginning at age 8. Not being accepted by the white kids and not being Black enough for the Black kids, it was definitely hard. There were times where that ended up in some pretty rough moments for me, both mentally and emotionally, and a lot of times, physically.

Q: How did you view yourself?

A: I identify with being African American, but the person who has shown me the most love and the most nurturing — the face that I looked up to when I came into this world was that of a white woman.

Q: What did your parents do for a living?

A: Neither of my parents graduated college. My dad was a car salesman, my mother was a bank teller who worked her way up to loan officer.

Q: Where did you go to high school?

A: I played sports, mostly football — wide receiver, defensive end, tight end. And I went on a program that was recruiting local talent to tour boarding schools. So, when I was 15 years old, I went to high school at Cranbrook in Bloomfield Hills, Mich. It was 95 percent white. That was the first eye-opening experience for me. But it went great. I played three sports there — lacrosse, football and hockey.

Q: Did you know what you wanted to do?

A: I didn’t have great direction or guidance. I wanted to be successful, but I didn’t know what it meant. It really wasn’t until I joined the U.S. military that I really, truly learned what accountability and true self responsibility were, because the U.S. military is taking absolutely none of your crap.

Q: What made you enlist?

A: I’ve always been a huge patriot. I love this country and I always have.

Q: How long did you serve?

A: My military service ran from 1992 to 1996. I did two years in a unit called the U.S. Navy Presidential Ceremonial Guard. When Richard Nixon died, I carried his flag in Yorba Linda, Calif., and then I did two years on board the USS Ticonderoga, during the Bosnian conflict, controlling the no-fly zone over Bosnia.

Q: What made you later enroll in law school?

A: That idea actually came from watching ( the 1980s television show) L.A. Law. This is how I gauged what success was. I did a year as a legal assistant and applied to law school, and started working at White & Case (an international law firm in New York) They were fantastic to me. People there were great. I had some great mentors. But as much as I loved White & Case, I’m not built to be a lawyer, certainly not a corporate lawyer. You’re sitting in your office by yourself reviewing documents 18 hours a day. I like to mix it up. I like people. I like interaction.

Q: So, you became a commodities trader?

A: I happened to be living across the way from a gentleman who was a trader on the New York Mercantile Exchange. That kind of spurred that next step.

Q: How was the transition from lawyer to trader?

A: It’s extremely physical. The crude oil futures pit had 800 guys standing on risers. When the bell rings, it’s like they take a ball of money, throw it up in the air and see who comes down with it. That was one of the toughest times of my life. I went from a six-figure salary to … I think I was getting paid $40,000. I didn’t know which way was up. All I heard was shouting. It was chaos. I’m not prone to headaches and I had headaches every day.

Q: How did you get through it?

Q: You then started your own trading firm, Atlas Commodities. What made you relocate to Houston in 2009?

A: Houston is the energy capital of North America, if not the world. I moved down here with a couple folks, and within two years we were 25 people, and we’ve just grown from here.

Q: How did you decide what business opportunities to pursue as you expanded?

A: Keeping an open mind and evaluating risk and reward has been instrumental. I pride myself on being honest with myself. Don’t allow your ego to affect the decision you make in business. If you can’t understand it, and you don’t know anything about it, and you don’t know people involved with it, why are you trying to do it?

Texas Inc.: Get the best of business news sent directly to your inbox

Q: How have your companies grown?

A: We have mostly grown organically. We have done some small acquisitions. At a certain point in business, once you get to a certain critical mass, it becomes hard to grow solely organically. You almost have to grow by acquisition.

Q: How is your business financed?

A: We have been entirely self-financed to this point. Initially, nobody wanted to give us money. Now we get a lot of offers. It’s very nice to be entirely self-funded and to not have any investors. We write the rules for what we’re doing. We answer to our clients and we answer to one another.

Q: Have you had to make personal sacrifices to achieve your goals?

A: I have been successful in almost every endeavor of my life, but it has come at a cost. I’m 51 years old. I always thought that I’d be married and have kids, but I have not allowed myself to be distracted in any way shape or form. It’s been an almost blinders-on kind of drive that I learned in the military.

Q: You seem passionate, though, about helping disadvantaged high school students through your foundation. Where does this drive come from?

A: We live in the greatest country in the world, and I believe you owe something back. When do kids from lower socioeconomic backgrounds get the opportunity to be around people that have great lives, that are educated, that have exposure to these kinds of opportunities?

The value chain of the energy industry is tremendous. You’ve got engineers, you’ve got traders, you’ve got investment people. I didn’t know about all that growing up and I wanted to give kids the opportunity to be successful without guessing what they had to do all the time. These kids are ambitious. Many of them are first-generation Americans, many of them don’t even speak English, and they don’t have that access. What a feeling to be able to give someone that exposure and watch them grow.

More: Read the latest oil and gas news from HoustonChronicle.com