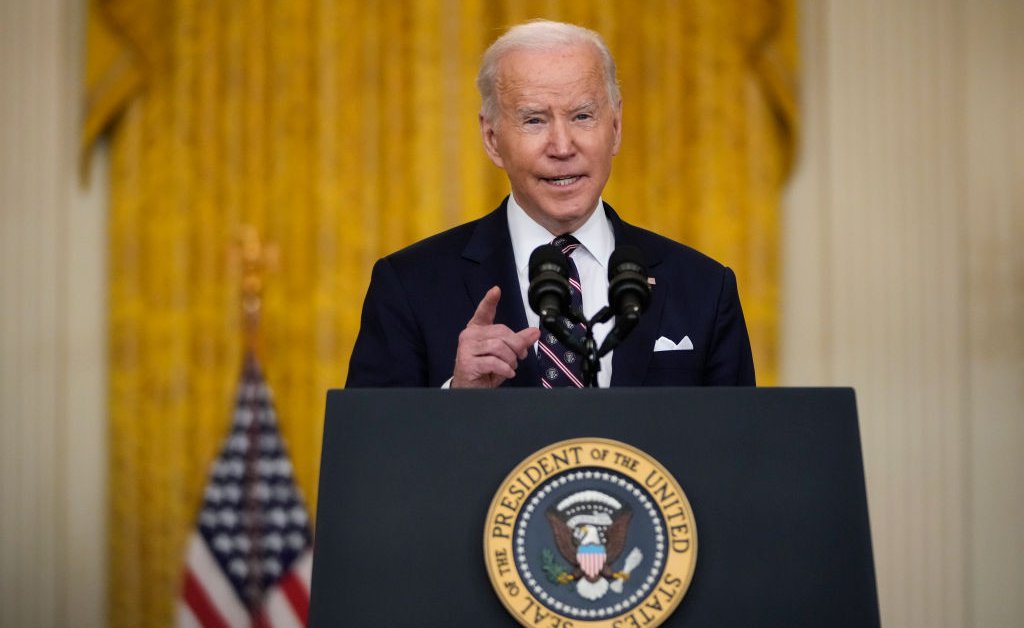 The United States is set to impose sanctions on Russia that “exceed anything we’ve ever done,” President Joe Biden said Thursday in response to Russia’s full-scale attack on Ukraine.

“Putin’s aggression against Ukraine will end up costing Russia dearly, economically and strategically,” Biden said. “We will make sure of that.”

The White House made the sanctions decisions in consultation with the Group of Seven (G7) leadership and the National Security Council (NSC), following conversations with both groups on Thursday morning. Biden announced the economic response amid calls from both Democrat and Republican members of Congress to impose harsh sanctions on Russian president Vladimir Putin.

The Russian aggression has triggered multilateral cooperation from countries “representing more than half the global economy,” Biden added. The European Union, Australia, Canada, Japan, New Zealand and the United Kingdom have already agreed to impose similar sanctions, according to the White House.

“We will limit Russia’s ability to do business in dollars, euros, pounds and yen,” Biden said.

Putin’s desire to take over Ukraine is a vision that “the United States and freedom-loving nations everywhere will oppose with every tool of our considerable power,” Biden noted.

Here’s a breakdown of the U.S. sanctions announced Thursday:

The U.S. is cutting ties with Russia’s 10 largest financial institutions—effectively severing any flow of money between the U.S. market and institutions representing almost 80% of assets in the Russian banking sector.

The most notable restrictions fall on the country’s biggest bank, Sberbank, and 25 of its subsidiaries, all of which account for over one-third of Russia’s financial assets. Other major financial institutions that the U.S. will fully restrict include VTB Bank, Bank Otkritie, Sovcombank OJSC, and Novikombank. Any of their assets that even touch the U.S. financial system will be blocked, and the U.S. government and its citizens are prohibited from doing any business with them. “That means that every asset [these banks] have in America will be frozen,” Biden said at the briefing.

Biden stopped short of implementing a blockage of so-called SWIFT transfers from Russia, explaining that the “sanctions that we have proposed on all of [Russia’s] banks is of equal consequence—maybe more consequence—than SWIFT.” He added that excluding Russia from SWIFT is “always an option. But right now, that’s not the position the rest of Europe wishes to take.” European officials reportedly opposed the SWIFT option because it would mean Russian companies and individuals would lose access to their main means of repaying some $30 billion in debts they owe to European lenders.

The White House has added more than 10 people and entities to the list of Russian elites (and their family members) that the U.S. has sanctioned over the Ukraine threat and invasion. That means any assets those individuals hold in the U.S. will freeze. These individuals will be cut off from the U.S. financial system, and they are prohibited from traveling to America.

“These are People who personally gained from the Kremlin’s policies, and they should share in the pain,” Biden said.

Officially, these civilian leaders are now on the “Specially Designated Nationals and Blocked Persons List” at the Treasury Department’s Office of Foreign Assets Control.

Restrictions on 13 Major Corporations and Other Entities

The sanctions also target 13 major Russian companies and other entities beyond the banking sector. That means the U.S. will apply new debt and equity restrictions on transactions involving the state-owned gas company Gazprom, the financial institution supporting Russia’s agricultural sector, and the Russian Railways train service.

These entities–representing Russia’s major industrial sectors–can no longer raise money through the U.S. market. The move is designed to damage the Kremlin’s ability to raise capital and generate revenue, according to the White House.

The Biden administration is restricting exports of “nearly all” U.S. items–as well as products made in other countries using U.S. technology, equipment or software–to entities including the Russian Ministry of Defense, which includes the Armed Forces of Russia.

A Block on Russian Purchases of High-Tech U.S. Goods

With so much of the world’s technology originating in the U.S., the White House wants to strike a blow to Russia by curbing its access to those advances. Blocking Russia’s (non-military) high-tech imports has widespread implications—it could affect the entire Russian economy, including its defense industry, and ultimately stymie its long-term growth.

A Russia-wide block of U.S.-produced “sensitive technology” will land heavily on the defense sector. The U.S. will also restrict access to technology produced in other countries that relies upon things like American equipment and software, which could also affect the military, as well as Russia-wide access to smartphones, telecommunications, televisions, avionics, maritime tech, and game consoles.

“We estimate that we’ll cut off more than half of Russia’s high-tech imports,” Biden said.