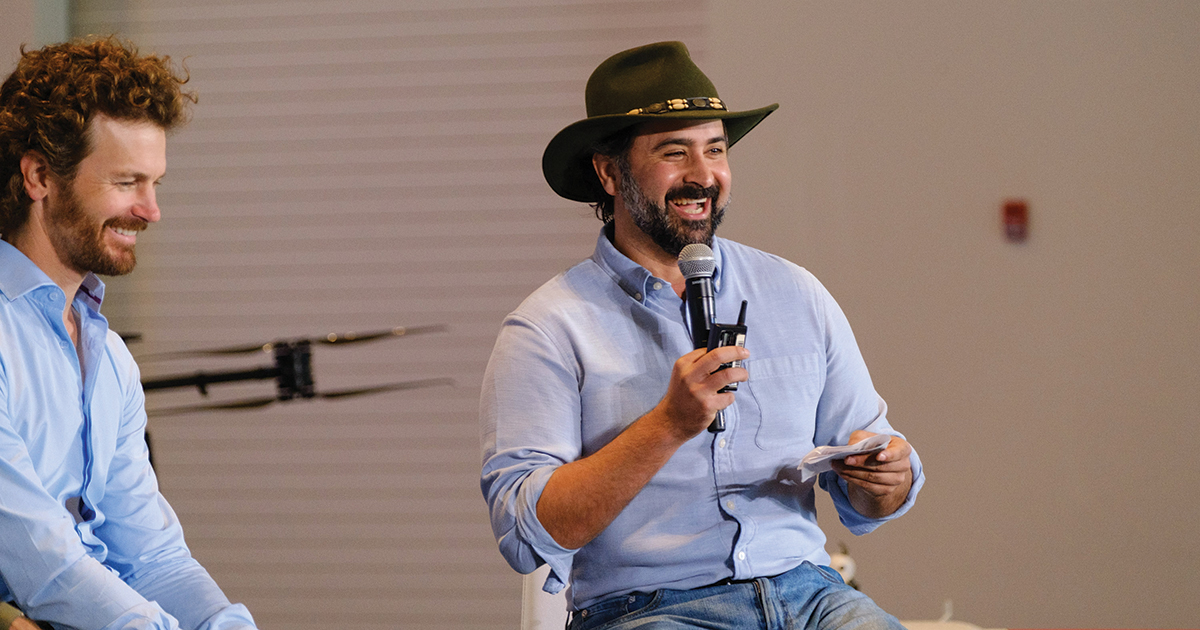 Cyrus Sigari says there is an innate human desire to go up.

“When you’re up, you see the world differently,” he said in a recent interview inside Thaden Fieldhouse at the Bentonville Municipal Airport. “You connect with nature. There’s an adventure element to it.”

Sigari, an aviator, entrepreneur, author and investor, is co-founder and managing partner of UP.Partners, an early-stage venture capital firm in California that invests in technology companies supporting advanced air mobility (AAM) and electric vertical take-off and landing (eVTOL) aircraft industries. This past October, the firm announced a fund valued at nearly a quarter of a billion dollars to invest in “the pioneering entrepreneurs who are creating the key enabling technologies that help move people and goods cleaner, faster, safer, and more efficiently in a multidimensional world.”

Sigari spoke in Bentonville recently at the Heartland Summit. The two-day, invitation-only gathering convened on May 11 at the downtown event venue Record with several speakers, including members of the Walton family.

The summit is the signature event of Heartland Forward in Bentonville. Heartland Forward formally launched in the fall of 2019 — one year after the Heartland Summit’s first iteration — and is spearheaded by members of the Walton family and led by former Walton Fellow and Milken Institute Chief Research Officer Ross DeVol. It is the first U.S. think tank focused exclusively on the economic situation of the heartland region.

Organizers say their goal was to promote action by convening people playing a role in the success stories of thriving areas of America’s heartland.

In several breakout sessions on the summit’s final day at various venues throughout Bentonville, attendees discussed strategies on multiple topics and shared insights on advancing the heartland.

Sigari participated in a session discussing a burgeoning space Morgan Stanley predicts will become a $1.4 trillion market by 2040. Advanced air mobility is a new concept of air transportation that moves cargo and people between places using innovative aircraft.

He shared the stage with Steuart Walton, a pilot and the founder and chairman of Game Composites, a Bentonville company that designs and builds small composite aircraft. Its signature product is the GB1 GameBird, the only FAA-certified two-seat airplane manufactured in the U.S. capable of unlimited aerobatics. Tom Ward, executive vice president and chief e-commerce officer for Walmart U.S., also participated in the panel discussion.

Sigari, an outgoing and engaging fellow, is also chairman of Gov. Asa Hutchinson’s Arkansas Council on Future Mobility. Earlier this year, the governor formed the task force to make recommendations on state policy to assist the private sector in AAM areas and attract related businesses, startups, innovators, and creators to the state.

Hutchinson formed the task force to enhance the state’s collective vision to be a global leader in the future of transportation for next-generation technology by 2030. That includes the possibility of flying cars and driverless vehicles and drones.

Sigari said he spends roughly half his time in Bentonville these days.

“There isn’t a place that moves more things than this region,” he said. “If you’re investing in future technologies that will transform that [industry], you need to be where the action is. It’s not in Silicon Valley, not in Detroit, not in Wichita, not in Munich. It’s in Northwest Arkansas.

“Personally, the [quality of life] work that Steuart and Tom are doing is pretty amazing. It feels like being at camp as an adult with all the fun stuff going on.”

Steuart Walton and his brother Tom are principals of Bentonville holding company Runway Group, making investments in numerous areas to raise the region’s quality of life.

‘BENEFIT FOR EVERYONE’
Sigari, a first-generation Iranian-American, was born in 1982 to refugee parents who fled Iran during the Islamic Revolution. As a child, he was consumed with his passion for flight.

“My first real inspiration was watching ‘Top Gun,’” he said, referencing the 1986 motion picture starring Tom Cruise. “As a child, that got me pretty fired up about the future and jets and flying around.”

Sigari, 40, took his first flying lesson when he was 11 — a birthday present — and he soloed at 16. At 17, Sigari earned his private pilot license, and at 18, he became one of the youngest commercial pilots in the country. He received his airline transport pilot certification at the age of 23.

In addition to owning dozens of aircraft, he is a helicopter pilot and owner, and he graduated from Purdue University’s Aerospace and Aeronautical Engineering program.

In 2006, he co-founded the jet brokerage JetAviva, which grew to be one of the world’s largest sellers of business jets, with annual sales of over $400 million. He said that experience deepened his appreciation for the power of community and helping humans connect.

“It exposed me to a lot of things happening around technology that could move the needle,” he said. “Not just for the top 1% of society. To go from helping billionaires to helping billions [of people]. The things we’re talking about have the long-term ability to help humanity experience the physical world.

“Only one of five human beings has ever flown. What happens when you unlock mass mobility on an entire planet as we’ve done in cities with cars? That is my ‘why.’ That’s what gets me up and moving every day.”

Sigari said signs are evident of progress toward technology to support a future with flying cars, though a few limiters will make it difficult.

One of those is avoiding anything that could make life worse instead of better.

“How could it make life worse? No. 1 is noise,” he explained. “Noise pollution is something that no one likes. It will not work when you start thinking of hundreds of thousands of these things in the air with that noise profile. The good news is that the technology is being developed now to make rotors and the movement of air a lot quieter. Whisper quiet.

“The second thing is that it needs to be for the benefit of everyone.”

SUMMIT SET
California-based UP.Partners is hosting its annual UP.Summit on June 6-8 in Bentonville. It’s touted as the mobility industry’s most important annual gathering, and Wired magazine referred to it in June 2018 as “the secret conference plotting to launch flying cars.”

That invitation-only gathering was in Bentonville and drew about 100 people. Cyrus Sigari, UP.Partners’ managing partner, said the conference launched five new products out of conversations that started there. The summit started informally as a gathering in Montana in 2017. It is now convened in alternating years between Bentonville, co-hosted by Tom and Steuart Walton, and Dallas, co-hosted by real estate developer and investor Ross Perot Jr.

“It’s the pre-eminent gathering of leaders who are transforming the moving world,” Sigari said. “From the largest companies to the most inspiring entrepreneurs, capital allocators and investors.”

Sigari said the UP.Summit has had a significant impact, resulting in direct investments of over $450 million into the participated companies.

The Bentonville gathering is invitation-only, but organizers planned a community day that will be from noon to 4 p.m. Sunday, June 5, at the Bentonville Municipal Airport. It’s free and will include interactive technology demonstrations, live music and flyovers.

Aviation entrepreneur says NWA ‘where the action is’